Sticking to the Plan | InterVarsity
Skip to main content
News

Sticking to the Plan 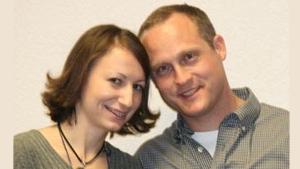 Josh Bilhorn was the only student from St. Norbert College at Urbana 96, but he didn’t feel lonely. He used the time to talk to as many people as he could and pray about a major decision he was facing.

As a college senior majoring in Business Administration, Josh already had a job offer from a large consulting firm. But he also felt a call to fulltime Christian service, perhaps as a missionary in China or on campus with InterVarsity. “I went to Urbana to decide which direction I should go,” he said. He ended up going all three directions, although not at the same time.

Even though he knew he would eventually be in fulltime Christian ministry, he felt it was important to take the job offer, at least for a couple of years. But he was able push back his starting date until September, so that he could spend the summer of 1997 working with missionaries in China.

“I basically did GIGs (evangelistic Bible studies) in McDonalds four to five nights a week, for four to five hours,” he said. “That was a great experience that confirmed my call to ministry.”

He enjoyed his job as a business consultant; it helped him to pay off his student loans and also provided health insurance for a major operation. He also enjoyed the church he was attending in Milwaukee. After two years, as he counseled with the pastoral staff, he decided it was time to answer the call to campus.

Campus Ministry – The Right Decision
Josh came on staff at the University of Wisconsin-Whitewater in the spring of 2000 and knew immediately that he was in the right place. “I love working with students,” he said. “I love the variety of students, their personalities, their ethnicities, their socio-economic backgrounds, everything.”

He knows he made lots of mistakes. He learned by trial and error, seasoned with grace and forgiveness. He also realized there were some unique opportunities for ministry on the Whitewater campus. He developed AGIG, an outreach to Hmong students, that has grown steadily.

He also encouraged several student leaders who had begun a Christian witness among Whitewater’s disabled student population, which numbers about 500, significantly larger than most college campuses. (The school has a highly regarded wheelchair basketball team with several national championships on its record.)

“The disabled have lots of questions about God’s justice and God’s goodness,” Josh said. “That’s not an easy conversation, but we started that conversation with them.”

A Clear Vision for Ministry
It’s that kind of strategic thinking and straightforwardness that made Josh a good staff worker at UW-Whitewater, and now makes him a good area director for southeastern Wisconsin, said divisional director Tim Peterson. “He’s not afraid to confront hard issues that others would fear and avoid.”

Tim was a team leader in northeastern Wisconsin when Josh and his brother Jeremy organized a chapter at St. Norbert College in 1994. Josh made an immediate impression. “I knew his freshman year that this guy needed to be on staff,” Tim recalled. “Josh and Jeremy were hungry for training, and they never came alone.”

The thing that Tim appreciates most about Josh, though, is his methodical faithfulness. He sets his priorities, makes his plans, and then follows through. By methodically sticking to a disciplined schedule, for instance, he has just completed the coursework for a Masters degree in Arts and Religion from Trinity Evangelical Divinity School.

For Josh, his top ministry priority goes beyond the students he serves and beyond the campus. “What I think is most important for me is to continually ask the Lord, ‘what leadership is needed to serve the church in the future?’ I take seriously the needs of the church and the world. I develop ministry to help students be prepared to meet those needs.”

“He also has a strong emotional quotient, with lots of sensitivity” Tim added. Even though Josh and his wife Opala had a baby this month (David Judah, born on Sunday, September 7th), and there were NSO events to attend, Josh also spent a lot of time at the hospital with the family of staff member Mike Chaloupka. Mike was injured in a recent traffic accident. The brain injuries he received were ultimately fatal. “That is very characteristic of Josh,” Tim said. “He has energy for God, and for people, and for the work we’re doing.”

You can make a direct financial donation to support Josh and his work with InterVarsity by following this link.