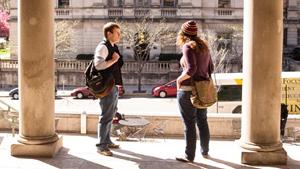 (Madison, WI) – The search for God and spiritual significance is alive and well on U.S. college and university campuses. InterVarsity Christian Fellowship/USA anticipates a record year of campus ministry in the 2012-2013 school year that is now getting underway.

During the 2011-2012 school year just past, InterVarsity saw 3,354 new believers come to faith in Jesus Christ. That’s an increase of more than 700 over the previous year, and more than double the same figure from seven years ago.

“In our 72 year history, we have never seen such a season of fruitfulness,” said InterVarsity president Alec Hill. “God’s Spirit is moving on campus and this is an exciting time to be involved in campus ministry.”

The growth is occurring at the same time that InterVarsity is experiencing increased resistance to its ministry on a small number of campuses. During the year just past InterVarsity chapters were de-recognized at Vanderbilt University in Nashville and the State University of New York at Buffalo. The de-recognition at Buffalo was overturned this summer by a student judicial body but Vanderbilt officials have not reversed a policy that led to more than a dozen Christian student organizations losing their recognized status.

Faithful to our Beliefs

"InterVarsity believes that a diverse campus environment requires the presence of groups which authentically and faithfully reflect religious beliefs,” said Hill. “We will vigorously defend our right to be on campus and to contribute to campus life. At the same time, losing recognized status as a campus organization will not end our ministry on any campus.”

InterVarsity Christian Fellowship is a campus ministry which has worked with students and faculty on U.S. college and university campuses for more than 72 years. InterVarsity has almost 900 chapters active on 576 U.S. college and university campuses, from Ivy League universities to community colleges. In December 2012, InterVarsity will host the twenty-third triennial Urbana Student Missions Conference at the Edward Jones Dome in St. Louis, with an anticipated attendance of 18,000.

Keywords:
Evangelism
Back to School