Taking a Risk to Love 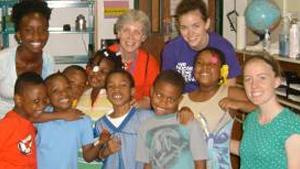 Living in a tiny apartment with no air conditioning, a week’s worth of clothes, and $20 for groceries isn’t how most students choose to spend their summers. Add to that a houseful of strangers in a tough Chicago neighborhood, and most people would pack their bags and head back to school in a second.

For Amy Wells, a junior at the University of Wisconsin-Eau Claire, spending her summer this way with InterVarsity’s Chicago Urban Project (CUP) and learning about God’s heart for justice and racial reconciliation deepened her faith and changed the way she viewed her campus. She even added sociology as her second major, so she could continue to help people work through issues of race, gender, and inequality.

From Country to City

Amy first experienced CUP during her spring break as a freshman with eight other students from Eau Claire. Going from a small and mostly white community to an ethnically diverse one in the city was eye-opening. “I’d never been a minority in my entire life,” said Amy. “People would stare at us or pretend we weren’t there.”

Throughout the week, Amy studied the Bible with the undergraduate and Asian American InterVarsity chapters from the University of Wisconsin–Madison. The students talked with locals about racial and economic injustices the community faced, and Amy heard similar frustrations expressed in the Asian American students’ stories of growing up.

“I left feeling I had been really sheltered in my life,” said Amy. “I really struggled with being white and how I can use my privileges in a positive way instead of oppressing other people with it.”

The Hard Work of Reconciliation

Before her junior year, Amy returned to CUP for their summer program. She joined other students as they studied the book of Amos, served in the community, and lived simply, with no electronics, limited phone usage, and few clothes.

“We didn’t have material things to give us comfort,” said Amy. Without internet or familiar friends, Amy found that she and her housemates talked more about the hard lessons they were learning together.

“Even though we are Christians, reconciliation didn’t just happen,” said Amy. “There was a lot more racial tension than I expected.” From shopping for spices on a mutual budget to sharing personal reactions to the injustices they saw in their neighborhood, the group realized how much their cultural and ethnic backgrounds shaped their perspective.

“It was hard working on these things there. But in the real world, it’s even harder because it’s not everyone’s goal to work at reconciliation,” said Amy. “There’s a lot of brokenness, and there’s no easy solution.”

Yet as hard as it was, Amy’s experience strengthened her conviction to seek out relationships with people different from her. “We need to surround ourselves with different people to have a bigger picture of God’s kingdom,” said Amy. “We should celebrate our diversity instead of being color blind. Everyone has a piece to bring to God’s table.”

Loving the Community You’re In

Returning to her campus, Amy wanted to continue pursuing cross-cultural relationships. When one of the students in Amy’s dorm Bible study, an Asian American woman, told Amy she wanted to start a Bible study to reach Asian American students who might not be comfortable joining the mostly white InterVarsity chapter, Amy was excited.

“After all I had learned about multiethnicity and cross-cultural ministry, I wanted to help and be supportive in whatever way I could,” said Amy. But she also wanted the group to be led by Asian Americans. When her friend asked for help and invited her to attend, Amy began going to the study as a participant.

The small group grew quickly; 15 students now attend. As Amy builds new friendships within the group, she realizes she has a unique role: to be a bridge for this small group to connect with the larger chapter and to help the chapter understand how to welcome more Asian American students.  “It’s a process and takes a lot of time,” said Amy. But through Amy’s and her friend’s intentionality, more Asian Americans have been attending the chapter’s events than ever before.

Through her InterVarsity experience, Amy has learned that each community—whether inner city Chicago or northern Wisconsin—has its own struggles, but God calls us to love others unconditionally, no matter where we are. “There’s brokenness all around us – in our homes and on campus,” said Amy. “We don’t have to wait to go anywhere to serve. Just be willing to take risks to love other people.”