Teaching Students How to Plant & Grow 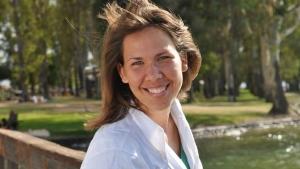 Laurel Thiel thought that becoming a physical therapist was the perfect career plan. Her dad was a doctor and her mom was a nurse. She could join them and they could work as a team on the mission field in East Africa where she grew up.

Even though she was heavily involved in revitalizing the InterVarsity chapter at Sonoma State University as a student leader, she didn’t think joining InterVarsity staff was for her. After all, she had two uncles and two aunts with InterVarsity and she thought that was enough.

But a physical therapy internship the summer before graduation began to raise questions in her mind. “I liked what I did that summer but it didn’t bring me life,” she said. Laurel found herself frequently thinking about campus ministry. When she returned to campus she was torn between the two career paths and not sure which one to take. So she spent a day alone praying in the mountains.

“That’s when I felt God calling me to come on staff,” she said. “Deep in my heart there was a desire to stay on campus and to stay with InterVarsity. There’s something about this ministry that I can’t walk away from.”

The next day, Laurel tore up her grad school application and started her InterVarsity staff application. Following graduation she was assigned to work at the University of California-Merced campus.

Arriving at Merced, five years ago, she found a medium-sized fellowship of about 75 people. Her second year at Merced, God gave her a vision of lights from her campus going out to all the other campuses in the Merced area. “My sense was that UC-Merced would be a place where students and staff were sent to these other campuses to start ministries there,” she said.

At a prayer retreat with her student leaders God gave the team a second vision: that no student would leave UC-Merced without the chance to hear the name of Jesus. “Our fellowship is growing in our desire for people to know about Jesus,” Laurel said, “and our desire to share our faith, and also our desire to see specific communities reached that aren’t being reached with the gospel.”

Last year, Laurel joined the Plant to Build Cohort, a team of InterVarsity staff members. This cohort came together to see if they could meld the plans developed by two previous groups that had separately researched strategies on how to plant and grow campus chapters. “We want to plant chapters that will build, and we want to build chapters that will plant,” Laurel explained.

Her experience with the cohort strengthened the small group focus of ministry on the UC-Merced campus. “If we believe that small groups are a place where people encounter Jesus in the context of relationship and community, then we want to have small groups in every corner of the campus,” she said. Each small group has apprentices who are being developed into leaders. When apprentices are ready for leadership they’re asked where their friends are on campus, and each is then invited to go plant a group there.

For instance Sam, a sophomore volleyball team member, planted a small group Bible study for UC-Merced athletes last year. With coaching from chapter leaders he was able to persevere through all of the challenges, and stay faithful to his vision even though it didn't grow as quickly as he had hoped. “I’m learning about how much I need to rely on God and rely on my community to help me reach my community of athletes,” he said.

“One thing I’ve learned through all of this is that students can do just about everything that staff can,” Laurel said. “There’s not much I do that I can’t teach and shouldn’t teach a student to do as well.” She credited her cohort experience for giving her the skills needed to teach her students.

She’s also been encouraged by the faithfulness of students like Sam who respond to God’s leading and don’t give up when the road gets rough. “It’s not just about me as staff casting vision and coaching—students cast vision for me too,” she said.

The UC-Merced chapter has now grown to almost 200 students. There are 30 leaders, each with an apprentice. Leadership meetings are chaotic but fun. Laurel said all of her top leaders have coached other leaders and planted small groups, and could easily plant a chapter on a new campus if God calls them to staff. She believes her vision for the other campuses in the Merced area is within reach. “I need a new dream,” Laurel concluded.