Thanks from a Parent 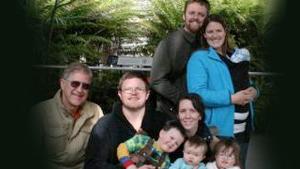 On a recent drive home, I received one of the most encouraging text messages in my five years on staff with InterVarsity:

“Keep up the good work! I think InterVarsity was one of the reasons both my kids are walking with Jesus!”

Marty Carraher and many other InterVarsity alumni parents have encouraged InterVarsity staff like me with their gratitude, whether in person, over email, or through text messages.

And every time, I am reminded of why InterVarsity’s ministry is worth it.

There is nothing more moving or encouraging to a staff member than hearing from the parents of transformed InterVarsity college students. The gratitude that flows from a parent’s heart awakens staff members’ hearts to the beautiful and personal reality that God is in fact using InterVarsity’s ministry to transform their kids’ lives.

I asked Marty if he would mind meeting up with me for coffee and sharing a little more of his own story.

A week later, we met at a local coffee shop near campus, and Marty began to share:

“One of the first things you need to know is that when I went to college at the University of Nevada, Reno in 1966 to 1971, I never really ‘got it’ about Jesus,” Marty said. “I also honestly didn’t care that much.”

“Now looking back, I realize that I didn’t care because I had never experienced the Holy Spirit,” said Marty.

While Marty had grown up his whole life in what he called ”secular church,” he never really understood what following Jesus looked like.

It wasn’t until after college, getting married, and having two children that Marty began to seek God for himself. When a new church started in Reno, Marty and his wife decided to check it out. They liked it so much, they got involved.

“We realized that we couldn’t expect our kids to take God seriously if we weren’t taking Him seriously,” remarked Marty.

While Marty and his family got more involved at their new church, Jesus invited Marty to take the next step—to follow him. Except this invitation didn’t happen at church.

Marty remembered the night that he and his wife went to a Phil Driscoll concert in Caesar’s Palace in Lake Tahoe, where he began to feel like the Holy Spirit was directly speaking to him.

“Phil Driscoll is an amazing musician, and a passionate person. During Driscoll’s concert, he shared his life story and how Jesus had impacted his life,“ said Marty. “After hearing Driscoll’s story, I decided that I wanted to give Jesus my life.”

Since then, Marty’s life has been transformed. When his kids started going to college, he was overjoyed that they both found InterVarsity.

“Both of my kids were involved in InterVarsity during college,” remarked Marty. “My son helped with set-up for large group meetings and my daughter led a small group Bible study.”

His kids also attended life-changing conferences like the Urbana Student Missions Conference and the Mark Bible Study Camp. His daughter was intentional about living in community with other Christians during college.

“I am so proud of my kids and who they’ve become,” said Marty. “My daughter met her husband at InterVarsity. They are both now teachers at North Bay Christian Academy in Novato, California, a K-12 Christian school wanting to make a difference in the lives of the next generation.”

“My son has returned to school in Farmington, New Mexico, and has blessed me with four grandchildren,” continued Marty. “Both he and his wife are helping teach couples about personal finances, getting out of debt, and staying out of debt through Dave Ramsey’s Financial Peace University ministry.”

Marty shared that he is thankful that InterVarsity taught his kids the value of changing the world while in college. Because now they are living it.

“The best thing in the world is to lift others up, to encourage someone, to be the hug that someone might need,” stated Marty. “I didn’t learn that until much later after college.”

“I hope that those who are in college now will take advantage of every opportunity that InterVarsity has to offer,” declared Marty. “There is nothing better than knowing Jesus and serving him and others with your whole life.”