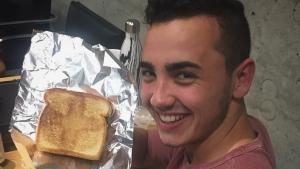 “Why did you just walk in, an hour late to this lecture?” the instructor asked the two students who paused at the door of the Friday night EMT training at Amherst College.

Grant, a senior, responded, “Well, we got a text for a sandwich. Did someone here order a sandwich?”

They looked around the hall. The instructor asked, “Who ordered the sandwich?” Finally, a student in the back raised his hand. Grant took him the sandwich and was walking out the door when the instructor spoke again.

“Wait, what just happened here? What are you guys doing?”

“We’re part of Amherst Christian Fellowship,” Grant replied. “We’re delivering sandwiches and answering questions that people text us about the message of the gospel, which is that Jesus died for sin and offers forgiveness to anyone who will call on him.”

“That’s kind of cool,” the instructor replied. “How do we get more sandwiches?”

Grant told him the number to text questions. The instructor wrote it on the whiteboard and said, “Don’t deliver any more sandwiches during the lecture, but you’re welcome to come back when the lecture is over.”

Back in the dorm kitchen, where the rest of Amherst Christian Fellowship was gathered, the next call came from Grant, slightly out of breath. “Fire up the grills,” he said. “We’re about to get swamped with orders.”

“Text-a-Toastie” is an outreach activity that has become popular with a number of InterVarsity chapters, particulary in the New England and the mid-Atlantic regions. It’s borrowed from InterVarsity’s sister movement in Britain, where a toasted cheese sandwich is more typically known as a toastie. (At Dickinson College in Pennsylvania the activity is called “Grilled Cheese, Text Please," and other names are used on other campuses.)

Text-a-Toastie starts with posting a bunch of flyers around campus and creating a Facebook event, both inviting students to text in a question they have about God, or a question they would ask Jesus. They’re promised an answer will be delivered, along with a grilled cheese sandwich (sometimes grilled Nutella is also an option).

The InterVarsity chapter gathers the bread and cheese and other ingredients. Then, as the calls come in, answers are prepared while the sandwich is grilled.

Typical questions include: “How can evil exist if God is all-powerful and all-good?” or “What does the Bible say about the role of women?” or ”Does Jesus love me?” The answers are not usually difficult. “We make sure that we’re not just answering the question but we’re also sharing the gospel,” said Chris Gow, an InterVarsity Campus Staff Minister at Amherst.

Sharing the Gospel story of Jesus inviting himself to the tax collector’s house to eat with his friends while some of the religious leaders grumbled outside, the InterVarsity member suggested Jesus might be found at the fraternity with the worst reputation: loving, inviting, and challenging them. “The student was intrigued, so we invited him to a Bible study to learn more,” Evan reported, adding, “That’s what we’re about. We help spiritually skeptical and curious students see Jesus for who he is, and we give believing students a broader and more active life in Jesus’ kingdom.”

At another Pennsylvania school, the InterVarsity chapter put up posters inviting questions and expected they would get about 20 queries. “Instead, we got 75 texts from students who had little to no previous connection with a Christian group,” reported Campus Staff Minister Emma Shaw.

The InterVarsity chapter at Maryland Institute College of Art has been hosting Text-a-Toastie events for several years, and the chapter is sometimes known on campus as the “sandwich people.” It’s an outreach that fits well on campus.

“For the campus, they see that we are a community that wants to engage in tough conversations and dig deeper into people’s barriers that they may have with God,” said former Campus Staff Minister Frankie Cerquetti. “For student leaders or members who are already strong Christians, it helps them see the campus with compassion and to trust in God more by going out, taking a risk, and sharing with someone about their faith.”

After that Friday night lecture interruption at Amherst, about 40 questions were texted in. Fortunately there was enough bread and cheese for all the sandwiches, and enough students to deliver them and prepare answers to the questions.

“We arrived at the lecture hall with our sandwiches,” Chris Gow reported. Names were called out, and people claimed their sandwiches and paired off. All around the room people were sitting, having one-on-one conversations about Jesus.

At the end of that amazing night, the InterVarsity students returned to their kitchen and held a spontaneous worship service. One more random question was texted in; someone wanted to know, “Am I welcome at Amherst Christian Fellowship?” A student was sent off with a sandwich and the message: “Come and see.”

As the student returned with the questioner, they could hear the sounds of worship coming down the hallway. Later that evening, Chris reported, the questioner decided to become a follower of Jesus.