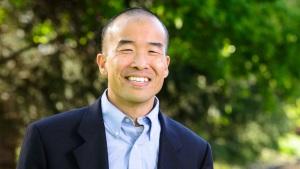 (Madison, WI) --- Tom Lin was commissioned as the eighth president of InterVarsity Christian Fellowship/USA on August 10, 2016.  Tom enters his new role as InterVarsity prepares to celebrate 75 years of ministry and experiences growth that is unprecedented since the earliest days of the Fellowship.

In brief remarks at the commissioning, Tom focused on honor and hope. “It’s an honor to be a part of something so important in the world of students,” Tom said. “Everywhere I go I hear about the impact InterVarsity has made. We offer hope in a world that often feels hopeless.”

InterVarsity currently has 1,730 staff, working with more than 1,000 chapters on 667 campuses. The number of InterVarsity chapters has grown by 20 percent over the last ten years. In the last year, 4,072 first-time professions of faith in Christ were reported by InterVarsity staff members, double the number from ten years ago.

“The turning point in my college experience came when I found a community of people who were committed to following Jesus together: the InterVarsity chapter on my campus,” Tom recalled. “That community gave me hope for my college years, and my passion for God and his mission grew. My goal as InterVarsity president is to create deep opportunities like that for more students on more campuses across the country.”

Tom is 43 years old, the son of Taiwanese immigrants, and the first full president to be chosen from InterVarsity staff. He became a part of InterVarsity as a student at Harvard University and served with InterVarsity or an affiliated ministry from 1994 to the present. He planted new student chapters at Harvard and Boston University, helped establish an evangelical student movement in Mongolia, led InterVarsity’s ministry in the Central Region of the U.S. as the Regional Director, and most recently served as Vice President for Missions and Director of InterVarsity’s Urbana Student Missions Conference.

Tom is the author of Pursuing God’s Call (2012) and Losing Face, Finding Grace (1996), both published by InterVarsity Press. He has served on the boards of a number of organizations, including Wycliffe Bible Translators and Missio Nexus, and he currently serves as the North American Regional Director of the Lausanne Movement. He has a B.A. in Economics from Harvard University, and holds an M.A. in Global Leadership from Fuller Theological Seminary.

InterVarsity Christian Fellowship/USA was officially incorporated in November of 1941. InterVarsity is a founding member of the International Fellowship of Evangelical Students, advancing Christian student work in 160 countries.