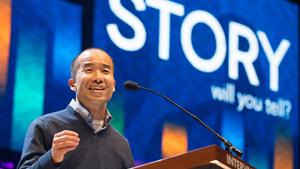 (Madison, WI) --- InterVarsity Christian Fellowship/USA announces that Tom Lin has been selected by the InterVarsity Board of Trustees to become the next president of the campus ministry. He will start on August 10.

In InterVarsity’s 75 years of campus ministry on U.S. college and university campuses, Tom becomes the first InterVarsity president who began his InterVarsity career working in campus ministry. After graduating from Harvard in 1994, he planted a chapter for Asian American students at Harvard, and another chapter at Boston University. He led numerous student missions projects in the U.S. and overseas, and helped design national training for InterVarsity staff.

In 2002, Tom and his wife, Nancy, left the U.S. to answer God’s call to go to Mongolia to help launch and direct a new student movement with the International Fellowship of Evangelical Students. In their four years there they saw 500 people become Christians, when there was only one known believer in the country just 15 years earlier. Tom then served as the regional director for InterVarsity’s central region, leading a team that covered four states, and planted 16 new chapters between 2006 and 2010.

Tom has leadership experience with a number of Christian ministries, serving the Lausanne Movement as the international deputy director for North America, and serving as a Board member for Missio Nexus and The Crowell Trust. He has also served as vice chairperson for the Board of Wycliffe Bible Translators. He is the author of Pursuing God’s Call and Losing Face & Finding Grace, both published by InterVarsity Press. He has a master’s in Global Leadership from Fuller Seminary.

Tom and Nancy live in Madison, Wisconsin, with their two daughters, Abby (11) and Olivia (9).

InterVarsity Board president Ron Williams made the announcement of the appointment and noted that InterVarsity has much to be thankful for as the ministry enters its 75th year. “We have seen record numbers in evangelism, we’ve seen growth nationwide, we’ve been able to lead important conversations in society, and we’ve seen God’s action through us in the lives of hundreds of thousands of people,” he said. “I believe God has cultivated wisdom in Tom that will be used to lead InterVarsity into even more fruitful ministry on our ever-changing mission field, the college campus.”