Urbana Scope – One Year Away 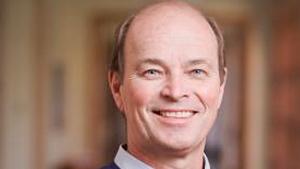 Paul Borthwick was 19 years old, attending his first Urbana Student Missions Conference, when he realized that God spoke with an accent. Listening to the Bible exposition of London pastor John R.W. Stott, Borthwick heard the gospel message explained for the first time from other than an American cultural perspective.

Getting a global perspective on how God is at work in the world, and responding to God’s global invitation, is what InterVarsity’s Urbana Student Missions Conference is all about. The next Urbana conference begins one year from today at the Edward Jones Dome in St. Louis.

Because Paul is a missions consultant who travels the globe and also teaches at Gordon College in Massachusetts, he can offer a global sneak peak. He did that recently with InterVarsity employees, before meeting with the rest of InterVarsity’s Urbana leadership team to help plan the Urbana 12 conference.

"Somewhere between 1985 and 1987 the Bible believing church became predominantly non-white, non-western," Paul said. “Our faith is being molded by, and is molding, the cultures of the world. It challenges all of us when we're interacting globally to suspend some of our theological judgments to listen and try to understand how somebody else from another land is hearing the scriptures, maybe for the first time."

When Christians in other parts of the world consider American perspectives on the gospel they sometimes see naïve optimism, according to Paul. And that’s not necessarily a negative assessment. One group told him, "We need American zeal.”

Paul shared five observations about our globalized society and Christianity.

Over the past century the Christian church has grown tenfold or greater in Africa. "On a global scale we are living in the fruits of the labors and sacrifices of the last 200 years of people who gave their lives to spread the gospel," Paul said. "In the 1880's there was scarcely a Christian in Korea. Now Korea is the second largest missionary sending country in the world."

You can hear or download his complete talk here.  At Urbana 09, Paul shared a similar overview, called Around the World in 60 Minutes.  The world is shrinking and changing with increasing rapidity. There will be even more to share a year from now at Urbana 12 in St. Louis. More perspectives on Urbana 12 one year away will be shared this week on the InterVarsity blog at www.intervarsity.org/blog.

Although InterVarsity is primarily a US-focused campus ministry, world missions has always been one of our priorities. This is expressed through our triennial Urbana conferences, as well as through the relationships we maintain with the 155-plus campus ministries in other countries that make up the International Fellowship of Evangelical Students. Those missions connections are growing stronger as we find ourselves in an increasingly globalized world.