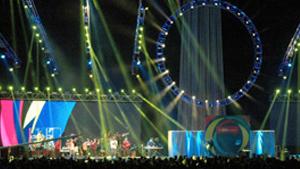 Almost 16,000 people are gathered in St. Louis for Urbana 12, InterVarsity's triennial student missions conference where the theme is The Great Invitation. In his opening remarks, Urbana Director Tom Lin called on the overwhelmingly college student audience to "surrender your plans and let God surprise you. God's invitation extends further than we can every imagine. Don't limit God."

Urbana 12 began today and will continue through New Year's Eve, next Monday, at the America's Center and the Edward Jones Dome. Attendees have access to more than 100 workshops and have the opportunity to talk with more than 250 missions organizations and seminaries who are exhibiting at Urbana 12.

At a news conference on the opening day, Tom was asked how college students today are different than the students who attended earlier Urbanas. He said that the differences make it both easier and more difficult to engage in missions.

"This is the first truly global generation," he said. "Study abroad is increasing. Two of every three students have passports. A lot of them have relationships across the globe already. They cross cultures quite easily."

But he said the college debt that weighs on many students is also a great challenge. "This generation is hugely in debt," he said. "That will prevent them or delay them from going into certain types of missions activities."

Some of the details of Urbana 12 look different than the previous Urbana conferences that have been held in St. Louis, and before that at the University of Illinois. Social media is everywhere: projected on large screens in front of the audience, and spreading the word about Urbana on the internet. Urbana 12 is being live blogged, and the main sessions are also streaming live at www.urbana.org/live.

But overall there is much Urbana 12 that is the same. "Ever since the first Urbana was held in Toronto in 1946, hundreds of thousands of students have committed themselves to serve God in the world," said Geri Rodman, the president of Inter-Varsity of Canada, which is co-hosting Urbana 12 with InterVarsity/USA. "We are praying and expecting God to work just as powerfully at Urbana 12."