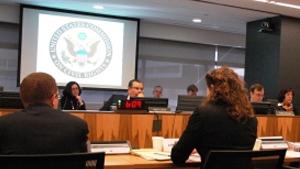 The U.S. Commission of Civil Rights is focusing on legal tension at the intersection of nondiscrimination policies and religious freedom. A briefing was held before the commission on March 22, 2013, and a report is anticipated by the end of the year.

InterVarsity is grateful to the commission for taking up this issue. InterVarsity staff and students have experienced this tension on more than 40 campuses over the past dozen years, particularly since the 2010 U.S. Supreme Court decision in the case of Christian Legal Society v. Martinez.

During the briefing, Commission members showed sensitive concern regarding religious freedom. “Religious groups such as InterVarsity are being substantially burdened by being forced off campus,” said Commissioner Peter Kirsanow. “There have been more pre-hearing comments about this issue than any other issue in my 12 years on the Commission.”

Panelist Lori Windham, Senior Counsel for The Becket Fund for Religious Liberty, added, “What you have lost is the ability of religious groups to retain their identity.“

So far InterVarsity staff or students representing more than 16 campuses have filed statements to be included in the public record of this briefing, detailing their experiences with nondiscrimination policies and religious student organizations.

In Christian Legal Society v. Martinez, the justices ruled that universities are allowed to institute all-comers policies, which require that student groups accept all students, as long as all student organizations are covered by the policy. InterVarsity has always opened its activities to all students but we require chapter leaders to affirm basic Christian doctrines and a code of Christian conduct. Some schools have asked InterVarsity to drop this requirement, because it seems to discriminate on the basis of religion.

In many cases, such as at the Universities of Michigan, Ohio State, and Minnesota, officials first raised the issue but then reached an accommodation or a policy change to allow faith-based campus organizations to avoid violating the nondiscrimination policy. But at a small number of campuses, such as Vanderbilt University, Rollins College, and Grinnell College, InterVarsity has been derecognized and deprived of the privileges given to registered student organizations.

The report of the Civil Rights Commission, when issued later this year, won’t have any legislative power, but it may influence legislation or legal rulings. InterVarsity has more background on this issue in the Campus Access section of our website. Following the USCCR briefing, InterVarsity's Greg Jao gave a short video report. The Christian Broadcasting Network also reported on the briefing.