A Vision to Energize a Lifetime of Ministry 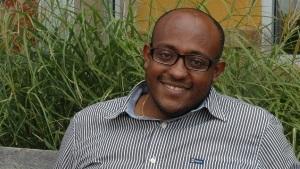 The faith journeys of his friends sold Esrael Seyum on InterVarsity’s campus ministry. “Seeing their life transformation in front of me was amazing,” he said. “It was becoming a distraction from school because it was so much fun and way more exciting than class.”

Conversations would start in a Bible study and then continue back in the residence hall after the study ended. Opinions would be shared and spiritual perspectives probed. But it was the spiritual transformation that spoke the clearest, from those whose lives were being shaped by God.

Esrael was introduced to InterVarsity at St. Mary’s College of Maryland, a public college in St. Mary’s City, Maryland, when some students knocked on his door and invited him to a game night. “I knew I wanted to be a part of a Christian community but I didn’t know what InterVarsity was,” he said. He was invited to a Bible study, and continued to stay involved, and then the next year he was leading a study.

Upperclassmen invested time in mentoring him and challenged him to go deeper in his faith. “I wanted to be like them,” he acknowledged. “I just loved doing things with them.”

The freedom to discuss faith and ask questions about spiritual matters resonated deeply with Esrael. In early 2001 his family had moved to the U.S. from Eritrea, an African country where religious freedom is greatly restricted. The faith commitment he saw in other family members in the face of adversity gave him a desire to know God more deeply, a desire that was met through his InterVarsity involvement.

However, growing up in a culture without parachurch ministries presented a huge challenge for Esrael when he decided to join InterVarsity staff following his graduation in 2009. Explaining InterVarsity’s ministry to his family and home church, as well as the need to develop ministry partners who would pray for and support his ministry, was a difficult barrier to overcome.

But after two years as an InterVarsity campus intern at the University of Maryland, Esrael returned to St. Mary’s College and found two strong advocates for his ministry in local pastors Walt Nilsson and Matt Hall. Walt had been president of the St. Mary’s InterVarsity chapter when he was a student and had lots of local contacts. “He would take me around and tell people, ‘You should support him,’” Esrael said.

Walt helped Esrael get plugged in to a discipleship ministry with a group of men at his church and also connect with the missions committee, which arranged regular dessert receptions to help him meet more potential ministry partners. Walt also told Esrael his annual ministry budget was not ambitious enough. “He literally rewrote my budget and then the church came along and helped me raise that money within a year,” Esrael said.

Inviting people into ministry partnership is not always easy but Esrael believes that he is presenting an attractive opportunity. “The work we do is so incredible and I get to invite people to be a part of that work on campus,” he said.

Esrael’s ministry partners don’t just help with the financial part of his ministry; they serve in all kinds of ways: providing food, providing transportation, and mentoring student leaders. One of his volunteers is responsible for connecting with local churches to make sure there are snacks for each week’s Large Group meeting. “I don’t even see that chart, but I know every Thursday food shows up,” Esrael said.

In a small college like St. Mary’s, with only 1,800 students, an organization like InterVarsity can quickly stand out. If present growth trends continue, 10 percent of St. Mary’s student body will soon be involved with InterVarsity. Esrael is hoping that soon there will be a Bible study in every department, as well as in every residence hall.

A student-led Friday night non-alcohol alternative social event called Options has generated large turnouts and curious inquiries from school officials about how they attract so many students. “We’re not pushing InterVarsity much but we’re creating interaction with InterVarsity students,” Esrael said.

Now, as an associate area director, he’s also exploring ministry opportunities on other nearby Maryland campuses.

Coming from a tiny country in Africa that most people don’t even know exists, Esrael says InterVarsity’s vision for creating world changers is what energizes his campus ministry. “We influence the rest of the world,” he said. “World leaders get their education here in the U.S. but it isn’t always reflected in healthy leadership back home.”

He wonders what would happen if more leaders came to power with transformed lives that came through InterVarsity leadership experience. “That’s the reason that I would want to be involved in InterVarsity forever, as long as we have that vision,” Esrael said.