"What Are You Thirsty For?" | InterVarsity
Skip to main content
News
By Kevin Boyd, Campus Staff Member, Wake Forest University

"What Are You Thirsty For?"

In John’s Gospel, chapter 4, Jesus enters into an unlikely conversation with an outcast Samaritan woman who has come to draw water from a well. He deftly connects her immediate thirst for something that temporarily satisfies with the deeper truth of Who he is – the only One who can quench our hidden thirsts.

By the end of the conversation, she has come to faith in him and becomes an evangelist, going back to her village and inviting others to “Come and see.”

At Wake Forest University and across the country, InterVarsity students are out to do the same thing – engage their peers in conversation and, when possible, share about Jesus’ offer to give us “living water,” the only kind that truly satisfies. We engage students with a tool developed by InterVarsity called a proxe station.

A proxe station is a guided experience used to clearly explain the gospel and help people respond accordingly. It uses interactive art and provocative questions, and the resulting conversations, to enable participants to discover realities about God, themselves, and their world, which inspire them to respond to Jesus.

We set up in a high-traffic area outside the Pit (Wake’s dining hall) and started conversations by asking passersby, “Can I get you a drink?” while offering them soda or water in a red Solo cup (usually known for other types of beverages on a college campus). If they had time, we asked them to tell us which thirst they thought was most important at Wake Forest: Love, Purpose, Success, or Fun.

Participants voted by putting colored stickers on a collage, so we could see the cumulative votes over time. We then asked which thirst was most important to them and how they planned to quench it this year.

This, along with Jesus’ quote about living water opened the door to talk about the deeper thirsts we all have and how we in InterVarsity invite Jesus to satisfy those thirsts. “Can I draw you a picture of what that looks like?” often led to sharing the gospel and inviting a response. 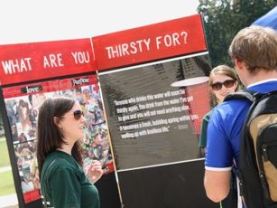 While I’m not aware of any on-the-spot decisions to follow Jesus, over 30 students indicated a desire to learn more either through an InterVarsity Bible study or having a follow-up conversation that would help address their questions.

Starting off the school year with an evangelistic outreach has given a life and vitality to our New Student Outreach that we haven’t seen before. And not only were our leaders stretched by having these conversations, they also learned some important lessons.

“Talking to others about Jesus is not as scary as I thought it would be. It was actually exciting getting to share the gospel and talk about how Jesus quenches our thirsts. I am so thankful that we took this leap of faith and followed through with this proxe station because I believe it was a growing experience for everyone involved.” - Hannah, senior

“We had a group of students praying simultaneously during the time that the proxe station was being run. After my first shift at the station, I entered into the prayer time extremely frustrated with myself, feeling like I had failed miserably in my attempts to interact with people. As I began to pray, I remembered the section of 1 Corinthians that describes the Church as a body and realized that God was affirming my gifts of design and construction (I helped Kevin build the station).” - Perry, senior

“My favorite part of the proxe station was this one guy who was willing to talk more but didn’t want to give us his contact information. He walked away like he was going to leave but continued to stand around watching us talk to people. Then he started grabbing people and making them participate. He would stop his friends and say, ‘Hey, hey do this thing. What are you thirsty for? Hey, who’s got the stickers?’ I was struck with how natural it is for someone who has encountered the gospel to tell the next guy about it.” - Brittany, senior

Even as we celebrate the great conversations we had, my heart also breaks for some students who heard the gospel message but as far as I know haven’t responded. I’m grateful that the Lord is allowing me to be a part of this work. It’s exciting to see how he pursues people, whether 2,000 years ago at a well or right now on a college campus.