When InterVarsity Was Derecognized at Purdue 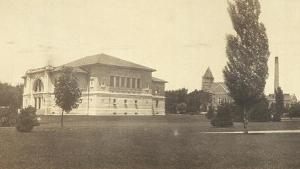 Even though many colleges have Christian roots, Jesus Christ is a controversial figure on campus. InterVarsity’s status as a Christian student organization has occasionally led to derecognition by campus administrators, not just recently, but also in the first decade of the Fellowship.

One the earliest derecognitions occurred in 1950 in West Lafayette, Indiana, when Purdue Varsity Christian Fellowship was notified that the Executive Council of the Faculty had voted them off campus. A letter from then President Frederick Hovde concluded, “I appreciate deeply the understanding attitude which you and the other members of your Fellowship have with respect to my problem in his matter.”

What was the problem? The correspondence indicates that denominational foundations, which provided worship services and other denominational resources in facilities just off campus, were upset with the chapter’s status as an official on-campus student organization. Pressure was being applied to remove the chapter from campus.

Stacey Woods, who was InterVarsity’s first General Secretary, rushed by train to Purdue for a hastily arranged meeting with President Hovde. Stacey followed up with a hand-written note of encouragement and a detailed typewritten note of instructions to the chapter president, Frank Mathews. But the faculty voted and the chapter was derecognized.

Campus ministry has continued at Purdue and thrives today with an undergrad chapter, a Greek chapter, Nurses Christian Fellowship, and several Grad fellowships. By the grace of God, InterVarsity was returned to campus rather quickly, although it's unclear exactly how quickly. Don Fields, InterVarsity’s longest serving staff member in Indiana (his tenure doesn’t quite go back to 1950 though), remembers that it was probably a faculty member who finally convinced the Purdue administration to re-recognize InterVarsity.

Huge social changes have occurred in the 65 years since Purdue Varsity Christian Fellowship was derecognized. Although there are still factions that attempt to undermine our Christian witness on campus, InterVarsity is still growing and has chapters on more campuses than at any other time in our history.