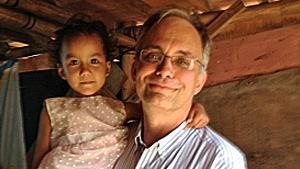 David Sutherland served in President Clinton’s administration, helped start in his house what has become a 1,000-member church, and moved his family to Asia for the sake of God’s global mission — all because of what God did in David’s life in college.

“My debate experience in high school and college inspired me to figure out what things are ultimately important, so that we can invest our lives in those things the most,” noted David. “But InterVarsity and Urbana showed me that God invites us to invest our whole lives in the things that matter most to Him.”

When David and his brother began attending the University of Louisville, they were focused on winning the national debate championships. They dedicated over 100 hours every week to practicing for debate competitions; and during their freshmen year, they won second place in the national championships.

God began tugging on the hearts of David and his brother. While they had devoted so much of their time and energy towards debate competition during their freshmen year, they both realized that making an eternal affect on people’s lives was far more important than any debate championship.

“During that camp, God showed me that He was the most important thing,” stated David. “So my brother and I went back to the Louisville campus determined to focus on deepening our relationship with God and partnering with this InterVarsity chapter planter, by investing a significant amount of our time investing in others on campus.”

David and his brother also drastically cut back how much time they invested into debate because they felt compelled to invest in people.

“Ironically, what happened at the National Championship felt very much like a spiritual experience,” remarked David. “Somehow, we won; it was as if God was saying to us ‘If you put me first in your life, I can take care of you.’”

While David and his brother were ecstatic that they won, David remembers this experience taught him that living a life dedicated to God’s purposes was ultimately the best thing he could do with his life after graduation.

As a result of debate (and debating countless topics and issues), one of the issues that David became most passionate about was global poverty. Then as David attended Urbana 85, he saw a bigger picture of God’s global mission to reach the entire world with his grace and truth. So after graduation and getting married, David and his wife decided that they would give their lives to God’s global mission and that they would work to alleviate global poverty.

When David studied to be a lawyer, he began looking for ways to go overseas and serve with missions. He soon found out that one of the few lawyers that can work overseas were international tax lawyers. So he and wife began praying, and sensed God directing them to Asia. As they actively looked and investigated different cities to live in Asia, David was offered a position to work in Asia with Morgan Stanley (today he serves as their CFO).

After moving to Asia, David and his wife investigated what ministries were already serving local communities. They wanted to find a local ministry that focused on evangelism, poverty issues, was run by indigenous people, and was accessible to family and friends.

They found a ministry called International Care Ministries (ICM) and began seek out opportunities to partner with ICM, using their job skills and experience. Today ICM is now one of the largest ministries in the Philippines. It operates through local churches and targets the poorer churches- people who are living off of 50 cents a day. As a result, these poor churches are seeing a 61% increase in household income, 22% reduction in illnesses, and these churches have doubled in size.

While David and his wife work tirelessly to build up local indigenous ministries in Asia, they know it is not by the power of their own hands that people come to faith, but rather by the power of God and the movement of the Holy Spirit. They’ve seen the kingdom of God grow like a mustard seed- from their house to the Philippines.

May we all follow David and his wife’s example and invest our whole lives in the one thing that matters-giving our lives to God’s global mission, using our gifts and talents to building up God’s kingdom wherever we are, and shining our light in the dark places of our world!