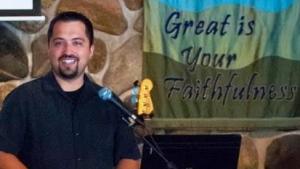 “I was shocked by the number of students from NIU and Northwestern that knew people at those campuses,” Anthony said. “However, one of the great giftings of the Latino community is the community connection.” Now Anthony has contact information for students who can introduce him to other students, with whom he can share InterVarsity’s ministry.

One of his immediate goals is to find at least one student on each campus who will join the LaFe students from NIU and Northwestern as they travel to Tampa for December’s national LaFe conference, Mi Gente (my people). In past years the triennial LaFe conferences have been key to the growth of LaFe.

Mi Gente will focus on the story of Moses. Moses, though Jewish, grew up immersed in Egyptian culture and spent 40 years in the desert among the Midianites. Then he was called by God to lead the Jewish exodus, without having much Jewish ethnic experience.

Anthony identifies with this aspect of the Moses story. With a Latino father and white mother, who divorced when he was five years old, Anthony immersed himself in white culture and did not acknowledge his Latino heritage. “It wasn’t until I became a Christian in college that I began to investigate what it meant to be not just white but white and Latino,” he said.

After investigating the Christian faith through most of his sophomore year at the University of Illinois-Urbana Champaign (UIUC), Anthony decided to become a Christian the following summer and began attending church. When he returned to UIUC in the fall, he stumbled into InterVarsity during Quad Day, the day that campus organizations reach out to students.

“I was walking through the Quad, and I saw a sign that read ‘Christian Fellowship,’” he said. “I thought, ‘I’m a Christian, I guess that’s for me. I should do something about that.’”

He filled out an interest card and got involved in InterVarsity. “I went to Bible study and worship services and that’s how I learned what it meant to be a Christian,” he said. After not making many friends his first two years on campus, he was thrilled with finding new friends through InterVarsity. He signed up for every camp and conference that was offered, and attended Urbana 03, the last Urbana conference on the UIUC campus.

Anthony started to think more deeply about his biracial identity during a summer with InterVarsity’s Chicago Urban Project. Later he read Sundee Tucker Frazier’s book Check All That Apply, Finding Wholeness as a Multiracial Person. “I began to understand the journey of a biracial, multiracial person,” he said.

After graduation he spent one year in ministry as an InterVarsity staff intern. He loved working with students but didn’t think he had a support base that would enable him to join staff full-time. So he spent the next four years in a variety of jobs, trying to use his marketing degree, but not really enjoying any of the jobs.
InterVarsity was always in the back of his mind.

Finally, during a miserable drive to work at a job that he hated, he sensed God asking him, “Are you going to let money be the reason that you don’t follow my will?” He knew he had to join InterVarsity staff, no matter what the obstacles. So six years ago, he returned to campus ministry, and was assigned to Illinois Institute of Technology (IIT).

Because their workload is heavy and they’re very focused on their studies, students’ isolation and loneliness is an issue at IIT. InterVarsity is helping build community among students as the largest student group on campus, and the most active.

As the chapter has matured, Anthony has started to develop his vision for planting new chapters at Hispanic Serving Institutions in the Chicago area (an actual federal designation). Being biracial and not speaking Spanish, he recognized that he did not feel Latino enough to be comfortable in leadership. But he remembered the encouraging words of former staff colleague Sandra Van Opstal the first time he heard the message on Moses.

“She said ‘You are not half Latino and half white, you are fully white and fully Latino, you are 100% both, you are a whole person.’ That was huge for me to hear that.”

Now, as he nurtures the chapter at IIT and begins to plant new chapters, Anthony is thankful for a job that he enjoys driving to each day. Campus ministry is advancing in Chicago.