"Why Would God Want Me to Have a PhD?" | InterVarsity
Skip to main content
News
By Gordon Govier

"Why Would God Want Me to Have a PhD?" 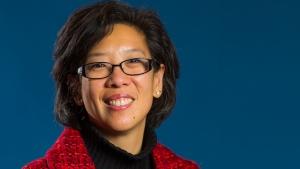 Kathy Tuan-MacLean is one of the few staff members who were involved with InterVarsity in high school. Growing up in Hawaiʻi, she was a leader of the InterSchool Punahou Christian Fellowship. Hawaiʻi was the “mission field” and not a state when InterVarsity was planted, and high school ministry was included in our mission.

Despite her early involvement with InterSchool, a call to ministry at age 14, and peripheral undergraduate involvement at Northwestern University, Kathy didn’t really plunge into InterVarsity until she began her PhD program in human development and social policy at Northwestern. Veteran campus staff member Dave Ivaska invited her to help him plant graduate ministry there.  “Northwestern Graduate Christian Fellowship met in my living room for those first two years,” Kathy said.  Conveniently, as a resident hall coordinator, she had an exceptionally large living room.

Kathy’s goal to study faith and moral development was foiled before she even began the program, due to her advisor moving away, resulting in a struggle to understand why God had called her to a PhD program. She attended InterVarsity’s Urbana Student Missions Conference in 1987, asking everyone she met, “Why would God want me to have a PhD?”

Because her program focused largely on urban poverty issues, she wondered whether God was calling her to serve him in the city.  At that point she knew she didn’t really love the poor, so she gave God the opportunity to change her heart by signing up for InterVarsity’s Chicago Urban Project (CUP). “It was a dangerous prayer—God always says yes when you ask him to help you love the poor,” she said.

The following summer Kathy served as an on-site staff member for CUP and discovered her unique gifts in helping students process the experience, leading her to finally join InterVarsity staff (after five years of being recruited by Chicago area director Jeanette Yep).  She wanted to serve campuses in Chicago, work with CUP, and finish her dissertation.

However, her love life (and God?) led her instead to join staff in New York City, serving Columbia and New York University, with the goal of also starting the New York City Urban Project (NYCUP).  She not only was supervised by Bobby Gross, the newly minted regional director, but also shared an apartment with him, his wife Charlene, and their son Evan for three-and-a-half years. After suffering through the worst first year on staff of anyone she knows and the breakup of the relationship that brought her to New York, she met Scott MacLean, a new staff in Boston, at Orientation of New Staff. They married two years later, after Scott moved to New York City and joined her at Columbia.

In 1996, Kathy gave birth to their first child 13 days after turning in her PhD dissertation, “The Interracial Friendships of White and Asian College Students,” and two months before moving to Boston so Scott could attend business school. She joined the Harvard Graduate & Faculty Ministries (GFM) team, serving PhD and policy students over the next eleven years, as a part-time staff member while she bore and raised two more children.  “I’m grateful for the flexibility InterVarsity gave me as a mother to both do meaningful work and parent,” she said.  “I especially appreciate InterVarsity’s long memory—so that when I was ready to re-engage more fully, I was welcomed and encouraged to step up.”

In 2007, Kathy became the area director for Boston GFM and planted the Boston Faculty Fellowship, a city-wide ministry with faculty from nine campuses. “We noticed God was bringing missional faculty to Boston, many of whom had been student leaders in our Fellowship,” she said.

Now, as the newly appointed associate director of GFM (beginning July 1), she will be working closely once again with her first supervisor, GFM director Bobby Gross.

“Kathy brings so many strengths to our leadership team from her own personal journey,” Bobby said. “She earned her PhD as a working woman, she led GFM teams at the campus and area level, and she has thoughtfully achieved a balance between her roles as a minister, wife, and mother. Her wisdom, experience, and leadership in the area of multiethnic ministry will be strategic for GFM as we aggressively pursue our goal to see multiethnic growth and ministry effectiveness.”

Kathy, for her part, relishes the opportunities she will have to advance GFM’s mission in her new position. “Figuring out how to grow the ministry—that’s what I’m excited about,” she said. “There’s so much room for growth. And working with InterVarsity means working with the best colleagues in the whole world.”