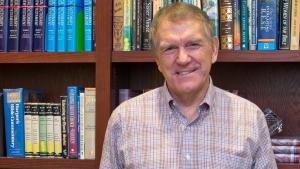 Into the chaos of the 1960s—The Vietnam War, assassinations, drugs and sex—the InterVarsity chapter at Pomona College spoke words of truth for student Victor Pentz. Those InterVarsity days would set him on a path of speaking God’s Word week in and week out in pastoral ministry.

Faith was an important part of Victor’s growing-up years, having given his life to Jesus as a young child. But at 18, he wanted an intellectual argument for his faith. “After considering a number of Christian colleges I attended a secular one, Pomona, one of the Claremont Colleges,” he said. “Amidst the upheaval of the 1960s I didn’t know what hit me. I could have gone either way. But in InterVarsity, at last I discovered a God who was a match for Philosophy 101. InterVarsity played the critical role of giving me an intellectual basis for my faith.”

InterVarsity led Victor to another important discovery in his life: his passion for leading Bible studies. “[With InterVarsity] I found a community of Christian students to study and pray with through the tumultuous craziness of sixties campus life,” he said. “Most of our witness was through quiet Bible studies and prayer meetings. . . . We saw hundreds of classmates consider Christ and many come to him.”

In the midst of this powerful witness to his classmates, he began to discern that God was calling him to pastoral ministry as a vocation. “A pivotal moment was the midnight prayer service at Urbana 67,” he remembered, “when I dedicated myself to full-time Christian service.”

After graduating from Pomona, he walked more fully into this new calling with faith—and some doubts. “I wasn’t fully convinced that I was cut out to be a pastor,” he said, “so after one year of seminary at Princeton, I took an internship working as an evangelistic beach minister among the surfers in San Diego.” His assignment was to “relate creatively to the beach culture,” according to the job description. “Everything has been downhill since,” he joked.

Reassured that he was, indeed, called to pastoral ministry, Victor finished seminary and in 1974 was hired as a youth pastor in Palos Verdes, California. From there he became the pastor of a new congregation in La Verne, learning lessons that seminary hadn’t taught him. “I really expected that if I could convince people of what the Bible said that getting them to do it would be a piece of cake,” he said. “How is that for naive? Discovering the power of social dynamics and the importance of understanding the motivational points of people in congregations was a real eye opener for me as a young pastor.”

After senior pastor positions at churches in Washington and Texas, Victor was hired at Peachtree Presbyterian Church in Atlanta, where God has used him in powerful ways for the past 14 years. “We’re deeply involved in the Atlanta community,” he said, “and see ourselves as missional believers who go out to join God in the work he’s doing in the world.” One of their most creative ministries in communicating Jesus’ love to the city has been to provide a $100,000 life insurance policy for every police officer in Atlanta—all 1700 of them! “This brings us close to the city leaders and the police and their families in many ways,” Victor explained.

Another joy at Peachtree has been building great ministry teams. “It’s a tremendous challenge to bring talented, passionate people from different backgrounds together to become one in serving Christ,” he said. “There’s a lot of ego management involved. But there’s nothing more fun than when the team clicks”—and the current pastoral team at Peachtree does. “Everyone shines in their role,” Victor said. “And we trust each other.”

In the midst of the joys of his work, however, Victor fully recognizes the challenges the American church and pastors today are facing. “With people living insanely busy lives and having shorter attention spans, how do we engage people in God’s Word at a transformative depth?” he asks. “How do we teach true biblical Christianity and not the popular heresy of a subjective ‘god within’ who is there to serve me? How do we make the case for biblical sexuality without sounding like Pharisees? . . . We need to retool our theological education, buildings, spiritual formation, and evangelism for this new emerging world.”

Two things that haven’t changed through the years—and won’t—are the gospel he communicates and his own personal preparation time. “The discipline that has sustained my preaching ministry through the years is to keep my mornings for study and writing. . . . It takes enormous discipline to prepare a fresh, engaging message 35-40 times a year.” He wouldn’t trade it, though, calling preaching “an amazing privilege.” But, he added, it’s one “that takes everything we have.”

Words of Wisdom for Student Ministers

As student leaders in InterVarsity prepare for a new year, Victor offers wisdom gleaned from his many years in ministry. “Don’t lose heart in feeling out of step with the prevailing views on campus,” he said. “People respect you more than you know.”

Many times Victor didn’t know that God had spoken to someone through him until years later. “I’ve had several emails and Facebook messages from critics on campus who later in life came to Christ,” he said. “This is far more common than you may realize. Inevitably they marvel at how our InterVarsity witness stayed with them and played a part in their embracing faith 10 or 20 years later. One such critic—who lived down the hall and was on drugs through college—wrote me his testimony from Greece where he’s now a missionary. He says that we InterVarsity students planted the seeds of the gospel in his life.”

“So is my word that goes out from my mouth:
It will not return to me empty,
but will accomplish what I desire
and achieve the purpose for which I sent it.”

It’s clear that God has used and is continuing to use Victor to speak his words of truth to a still-chaotic world. It’s also clear that Victor, like that powerful word he preaches each Sunday, is achieving the purpose for which God called and sent him.