Working for Shalom on Campus 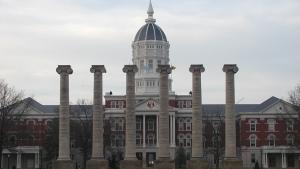 InterVarsity staff and students were among those swept into the maelstrom at the University of Missouri-Columbia this week as the pain of unresolved racial tensions boiled over on campus, resulting in the resignations of the school’s president and chancellor, followed by threats of violence against the Black student community.

Matthias Chan, one of four volunteer staff re-planting an Asian American chapter at Mizzou, found the students he talked with unsurprised at what happened. As members of an ethnic minority they see frequent examples of systemic injustice. They were disappointed at how people were responding to the events but not quite sure how to respond themselves. Asian Americans often feel like outsiders looking in at the issue.

But rather than sit out the dispute, a group of Asian American and international students felt called to engage and support the Black students out of their conviction that God wanted to see his shalom recognized on campus, and an end to racism and marginalization.

Late in the evening on Wednesday, November 11, 2015, InterVarsity team leader Adam Leong reported on their efforts to provide healing and hope on campus:

Our staff team worked tirelessly in a number of essential ways:

InterVarsity’s vision is to see students and faculty transformed, campuses renewed, and world changers developed. Our hope is that renewed campuses will be places where students are appreciated for their innate human dignity and not marginalized because of their ethnicity.

Greg Jao, InterVarsity's Vice President and Director of Campus Engagement, is interviewed by CBN News in a story about the University of Missouri

University of Missouri photo by Jay Buffington via WikiMedia Commons