“Ridiculous” and “Scary”: Bob Grahmann’s 40 Years of Ministry With InterVarsity 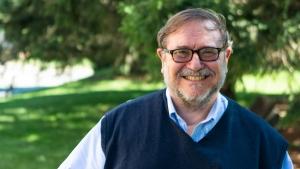 The train stopped at the border between Hungary and Romania. Bob Grahmann was sitting in the last row of seats. He saw the glaring searchlights, the dogs, and the barbed wire outside. He watched as guards boarded the train with their machine guns and methodically rifled through the passengers’ luggage.

It was 1983, at the height of the Cold War. Bob was an InterVarsity Area Director in New Jersey with four years of campus ministry experience preceded by four years as a local church pastor. A friend working in Eastern Europe had invited Bob to teach church history to Romanian pastors for three weeks during the summer. When they met in Vienna, the friend told Bob that his wife was sick and Bob would have to travel on his own.

As the Romanian border guards moved down the aisle, getting closer and closer, Bob didn’t like what he saw. “I have a whole suitcase full of Christian books,” he thought. “This is going to be really bad.” Bob knew that many people were praying for his trip. And strangely, as the guards got nearer and nearer, he felt at peace with whatever was going to happen.

“They got to the person in front of me and the train started to lurch a little bit,” he recalled. “They said to each other, ‘That’s it.’ They came over to me, shook my hand, and said in English, ‘Have a nice time in Romania.’ Then they jumped off the train. I was the only one on that train whose luggage they did not check.”

With that trip Bob was hooked on international ministry. “I thought, this was the hardest thing I have ever done. This was ridiculous. This was scary. And I want to do this the rest of my life.”

Within a couple years Bob and his wife Patricia moved their family to Vienna. They were invited by InterVarsity’s Missions Director at the time, John Kyle, to begin a Global Project in Eastern Europe. InterVarsity students from the US came to Eastern European countries to assist evangelistic summer camps organized by the Slavic Gospel Association.

Soon they were also working with the International Fellowship of Evangelical Students (IFES). Student Christian movements were expanding as communism began to lose its grip on Eastern Europe—something Bob witnessed first hand. “I was there when the walls came down,” he said, referring to the fall of the Iron Curtain in 1989.

In 1990 he returned to the US to succeed Barbara Boyd as director of the Bible and Life discipleship training. But he couldn’t stay away from Eastern Europe because the new student movements needed Bible training.

“They were coming out of seventy years of Communism and all of a sudden it disappeared,” he said. “I returned three or four times a year through the 1990s. I started Bible and Life in Russia, Ukraine, Belarus, Kyrgyzstan, Kazakhstan, and Georgia.”

In August of 1991, Bob was in Vienna and took a phone call from InterVarsity’s then Missions Director Dan Harrison, asking him to go to Albania and set up a Global Project. Until that time Albania had been the most atheistic country in the world, and closed to most visitors. Within hours Bob was able to get a visa and a seat on the once-weekly flight between Vienna and Tirana.

He landed in the middle of the night and providentially met a recent graduate of the University of Tirana English Department, who had been led to Christ by a previous visitor two weeks earlier. He told Bob the English faculty at the university was meeting the next morning but advised Bob to watch out for the department chair, who also happened to be the chair of the Communist Party at the university.

Bob presented InterVarsity’s plan for the cultural exchange project at the meeting, including the fact that they would be studying the Bible. “The chairman looked at me and she said, ‘We have been without God for 50 years in this country, and we really need that. Where do I sign?” The next summer there was a Global Project in Albania.

At a conference in 1999 Bob was told by the leaders of the IFES movements in Eastern Europe that they felt they were suffering from lack of proper training.  "We'd like you to come and start a training institute for us, for national staff in Eurasia, to train us in theology, Bible, skills of the ministry, and engaging the cultural and spiritual formation," they told him.

In 2002, Bob and his wife Patricia moved overseas again, this time to Kyiv, Ukraine to start what he called The Barbara Boyd Institute for Staff Development and Training in Eurasia. The program was funded for the first 12 years by an entrepreneur who had been mentored by a college professor who, in turn, had been mentored in Bible study by Barbara Boyd.

In 2010 Bob and Patricia returned to the US so Bob could become director of Link, InterVarsity’s program which sends staff volunteers overseas to partner with IFES movements in other countries. He directed Link for seven years and is now Senior Missions Ambassador, splitting his time between recruiting for missions, Bible study training, and Bible training overseas with IFES.

He also continues to work with the leaders of five IFES movement whom he first started mentoring when they were students. “Mentoring is one of my favorite activities,” he said. “When I was a freshman, an older student discipled me, really invested in me. Not a staff, not a pastor, not a missionary, but a student who taught me everything he knew about Jesus and really helped me. And that's a model I use.”

After becoming a Christian in college, Bob went to seminary and started pastoring a small church in New Jersey. But he was impatient and began to wonder if there wasn’t another way to change the world for Jesus. He attended Urbana 76 to investigate missions and sat in on a session with then InterVarsity president John Alexander. Many of the questions had to do with what career people choose after they leave InterVarsity staff. Some, of course, become pastors.

“I went up to him afterwards and I said, ‘Have you ever had a pastor come on staff instead of a staff go to be a pastor?’ He said, ‘It’s very unusual. But we’ll check with your church. If they’re really mad that you’re leaving, we want you.’”

The church was not happy to lose its pastor. But the lives of generations of students in the US and abroad have been changed because of Bob’s decision.

Following is the video that was prepared to celebrate Bob's first 40 years with InterVarsity. (Yes, he's not ready to retire yet.)