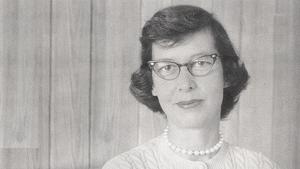 Barbara was introduced to inductive Bible study as a student leader by Jane Hollingsworth in 1945 at Campus-in-the-Woods in Canada. She taught elementary school for a few years after college but left to attend seminary and then joined InterVarsity staff in 1950. After working with Paul Byer on California college campuses for 10 years, she returned to her native New Jersey in 1960.

Traveling to a promotional dinner one day with InterVarsity leader Charles Troutman, Barbara was asked what she liked best about campus ministry. She said, “Bible study.” After being encouraged to find a way to help students improve their Bible study skills, she worked with her Regional Director to put together a weekend of Bible study training for students. Launched in 1964, it became known as Bible and Life.

“We trained them in the lordship of Christ, in how to have a healthy Quiet Time, how to be a real friend with a non-Christian, and how to lead a few friends in a Bible study, to lead them to Christ,” she recalled. “We called it Level One.”

After being introduced to the basics of Bible study, students wanted more. Level Two was developed, which taught the principles and joy of inductive Bible study. Later, Level Three was added, to teach students how to help younger Christians grow in their faith. “The program was based on the conviction that the Word of God does the work of God,” Barbara said. In 1969 she worked with Keith Hunt to plan a more advanced curriculum called The School of Discipleship Training, which was offered at Regional Training Centers.

Barbara developed the training over a period of time, field testing along the way and preparing the course materials on her own mimeograph duplicating machine until 1970, when InterVarsity Press took over the printing. A poster on the wall near her desk said, “InterVarsity is students moving with God on campus. Bible and Life is a 3-level course designed to train students to become God’s initiators and leaders—spiritual athletes who will run the race that lies before them with strength, discipline, and Christlike character.” 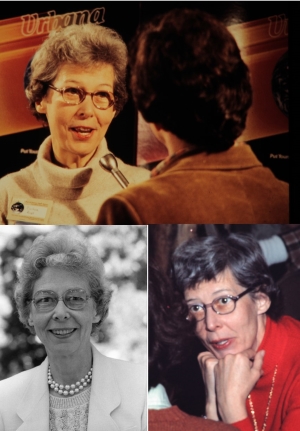 Bible and Life was one of the elements that contributed to the great growth that InterVarsity experienced during the 1970s. More than 80,000 students participated in one of the three levels of training between 1970 and 1990, when Barbara retired. She also trained generations of InterVarsity staff and her influence beyond those she touched directly is incalculable. Tim Keller, Pastor Emeritus of Redeemer Presbyterian Church in New York City, said, "As a Christian teacher Barbara had an enormous impact on me. More than anyone else—in person or through books—she taught me how to study the Bible. Her Bible and Life Conferences were deeply formative for me, both intellectually and spiritually  Since I’ve spent my life expounding the Bible, you could say she gave me the tools of my trade. I owe her more than I could express."

Barbara never married, though in the summer of 1953 it looked like marriage was in her future. She received a marriage proposal by letter from Ralph Willoughby, a man she had met in California while he was studying at Fuller Theological Seminary and employed part time by InterVarsity. That summer he was working at a Pioneer Camp in Canada and she was at Campus by the Sea.

Ralph had been part of the InterVarsity chapter at the University of Michigan, and Stacey Woods had asked him to develop the property in the Upper Peninsula of Michigan that had been offered to InterVarsity for Cedar Campus.

But then Barbara received word that Ralph had died suddenly after contracting a rare form of polio. She left Campus by the Sea in shock and flew to Ann Arbor for the funeral. Later she said that her ministry with InterVarsity was part of his legacy, and she acknowledged that she would not have been able to serve InterVarsity so fully had she been married. Willoughby Lodge at Cedar Campus is named for Ralph.

“Barbara’s Bible and Life program influenced over 100,000 students in the USA and Canada from 1964 to 1997,” said Bob Grahmann, InterVarsity Missions Senior Ambassador. “And it’s still influencing thousands of students overseas because it’s still ongoing, and growing, in the International Fellowship of Evangelical Students programs in Europe, Eurasia, the Caribbean, and Africa.” Barbara's legacy also continues through a series of  inductive Bible study resources that are found on our new Bible study site called howto.Bible and the Lifeguide Bible studies published by InterVarsity Press.