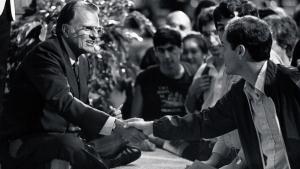 It was a true honor to represent InterVarsity at the funeral service for Billy Graham. He was the epitome of a humble, devout, and missional disciple.

The Lord used Rev. Graham to heal my fractured family. At a Seattle crusade before I was born, my half-brother Dwight came to faith. Nearly two decades later, Dwight led my brother Grant to Jesus who in turn influenced my conversion. The funeral reminded me of my own faith journey.

I was most touched by the tributes of Rev. Graham’s sister and five children. Paraphrasing one: “Dad was the same at home as on the road. There were not two Billy Grahams—public versus private. There was only one.” May the same be said of each of us in terms of integrity, ethics, and temperament.