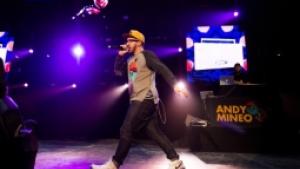 Recently graduated from the City College of New York (CCNY), Andy Mineo lives in a house with five other guys with the intention of helping plant a church, reaching out to the Caribbean immigrant community around them, and opening their house for weekly small group fellowships.

He also intends to become more deeply involved in the music industry. If you’re a fan of Lecrae’s “Background,” then you’ve already heard his vocals. Formally known as C-lite, Andy is a rapper with a growing fan base.  Andy self-describes his occupation as: minister, rapper, and producer.

Update: In January 2014, Andy released a new album, Never Land, which quickly rose to #2 on the Billboard rap albums chart and #13 overall. We had the chance to sit down and talk with Andy about his love of God, church, hip hop, and InterVarsity. Watch the exclusive interview with Andy below.

Andy’s ministry and music are all connected through his experience as a leader of the CCNY InterVarsity chapter. He was chapter president during his junior year.

“Through being a leader with InterVarsity, God revealed so much to me about his plan for us to reach the world around us and the world at large,” states Andy. “I’ve developed a much bigger view of what it means to be on mission with Jesus—going to Urbana was one of those times.”

“A lot of what we do at our church plant is taken directly from the things I learned at InterVarsity,” shares Andy. “And Urbana really sparked in me the idea of missional living.” (Urbana is InterVarsity’s triennial student missions conference, coming up December 27-31, 2012, in St. Louis – Register today!)

During his junior year, Andy leveraged his influence as InterVarsity president and as a Resident Assistant in the dorms to hold all kinds of events, from Bible studies to events focused on bringing awareness to global issues like hunger and poverty.

“Because CCNY is the second most diverse campus in America, I was able to build friendships with people from all over the world and teach some of them how to be effective missional leaders,” says Andy. “Some of them have since returned home to other countries.”

Andy’s leadership was instrumental in seeing the InterVarsity chapter at CCNY double in size this past year and paving the way for other musicians and artists to step into cross-cultural ministry at the school.

Today, Andy uses what he learned as a leader in InterVarsity to be a more effective church planter and leader.

“A lot of what we do at our church is similar to what I learned at InterVarsity—empowering and inviting new leaders to serve, leading small groups, casting vision, and following up with people,” states Andy. “InterVarsity has made me a better leader and thinker, especially as I think about how to use my platform for the greater global mission.”

As a rapper, Andy hopes to change the way people see the world through his art. His songs, “Everyday Thing,” “In My City,” “Formerly Known,” and “Fools Gold” are full of messages about Jesus and the hope that he offers.

“I want to debunk unhealthy Christian stereotypes and build long-term trust with consumers,” shares Andy. “I want to create music and movies that paint a biblical worldview and also foster a safe marketplace where ideas about God, faith, religion and its implications can be discussed and considered.”

Other musicians from CCNY’s InterVarsity chapter are following Andy’s example and they are finding success and respect in the music industry.

Even though, Andy has left quite the legacy on his InterVarsity chapter at CCNY he has a few last words of encouragement for this generation.

“Dream big, act practically. As you live life, make disciples,” declares Andy. “Be mindful of the next generation and make intentional steps to invest in them. You have no idea the impact you could have on the world through investing in just one person.”

In what ways may God be calling you to “dream big and act practically”? In your InterVarsity chapter? In your workplace? Who is that one person that God might be asking you to personally invest in?

In January 2014, InterVarsity had the chance to interview Andy shortly after his new album, Never Land, dropped. For more on the interview with Andy, click here.

In the video interview below, several of Andy’s distinctives come to light: his thoughtfulness, his dedication to his art, his commitment to the church, his humility, and his deep desire to bring glory to God through his talents and passions. And as you’ll see, he’s a lot of fun.