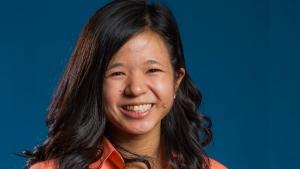 At the beginning of the 2014-2015 school year, when California State University InterVarsity chapters were derecognized, students on the Sacramento State campus needed a new meeting place since they no longer had the status needed to formally reserve a room for their large group meetings. An out-of-the-way alcove on the second floor of the University Union was discovered, where they could meet informally.

Audrey Chan, InterVarsity’s Team Leader at Sacramento State, said that arrangement worked well for a couple of weeks. Then the director of the union contacted the chapter leaders and invited them to his office. Concerned about the future of their chapter’s activities, the chapter leaders called for prayer and fasting.

Once in the meeting, the chapter leaders discovered that the director was a believer.  He told them that he had talked with people at his church, located nearby, and they wanted to offer the chapter a place to meet in their building. The students, in response, shared why they thought it was important to continue meeting on campus.

Finally, the director told them that rules for meeting in the union were vague, so if they didn't put up any signs, they would be allowed to continue to use the second floor alcove. “My students came out of the meeting in tears, amazed at how God answered their prayers,” Audrey said.

Meeting informally in that public space was slightly awkward. But Audrey reflected that maybe that was what campus ministry was supposed to be like. “Student life was going on around us and we were right there, an intersection of faith in the space of student life,” she said.

One of the other outcomes is that the director of the union is now part of the faculty and staff fellowship that has begun at the college.

When Audrey arrived at Sacramento State in 2012, starting a faculty and staff fellowship was not one of her goals. She was focused on student ministry. But people kept telling her about professors they knew who were Christians, so she started putting names in a spreadsheet. While playing ultimate frisbee one day, she met another professor who had attended a Christian college, so she added him to the list.

“I would meet with them, hear their story, share InterVarsity’s vision, and try to connect the dots for them about campus ministry,” Audrey said. She was surprised to discover that five of the professors were already meeting to pray together. Finally, she planned a faculty luncheon and invited everyone on her list. Nine people came and they prayed together and shared stories about praying over their class rosters. “That was incredible,” Audrey said. “It helped me see that they’re not there for tenure; they’re there to see God’s kingdom advance.”

Through that experience, Audrey discovered an enhancement to her own campus ministry. As a self-described high achiever in college and someone who thinks deeply about education, her developing friendships with faculty have felt like an unexpected gift. She enjoys her conversations with faculty in a different way than she enjoys her conversations with students.

Her relationships with faculty have also directly benefited her undergraduate student ministry, as interaction between the two groups began. Some students had never considered the possibility that their professors might be Christian believers. The faculty/staff fellowship sometimes met with the undergraduate fellowship to pray together, and students began to consider whether to invite other professors. An athlete in the chapter discovered that her trainer was a believer and their professional relationship turned to fellowship.

In early March, Christian faculty from Sacramento State and the University of California, Davis, planned and led the first NorCal Faculty and Staff Gathering, with about 30 faculty, staff, and graduate students attending. “I heard at least one other faculty share about wanting to start a prayer group on her campus,” Audrey said.

Audrey encourages fellow InterVarsity staff to invest in searching out and contacting Christian faculty and staff on their campuses, noting that they are potential allies in ministry who care deeply about the campus and its students. “Partnering with them has changed my ministry with undergraduate students, both in giving my students a larger vision of reaching the campus, and also in the unique partnership that students and faculty and staff can have together,” she declared.

Professors and staff have been on campus, in most cases, a lot longer than the students and the InterVarsity staff. “They understand the college world,” she said. “They are praying for the same environment that we are.”

As a student, Audrey attended the University of the Pacific, a private school that prided itself on small class sizes and strong faculty/student relationships. She was invited to InterVarsity Bible studies as a freshman and found that they brought a lot of clarity to her Christian faith. She became a Bible study leader as a junior and enjoyed watching how God used the conversations in the study to change the lives of fellow students.

“Students make significant life decisions in college and they end up in amazing places,” she observed. In 2010, as her days as a student ended, Audrey went to Kolkata, India, as part of InterVarsity’s Global Urban Trek. Her summer in the midst of stark urban poverty helped clarify her desire to see more lives changed by the power of God’s Spirit and Scripture, and confirmed her decision to join InterVarsity staff.

Audrey spent her first year on staff as an intern at the University of the Pacific, and then moved to Sacramento State, where she has been for the past five years. Every year at Sacramento has been different, with a lot of leadership turnover that reflects the large commuter population of that campus. At the end of this school year Audrey and her husband will be moving to the South Bay Area of San Francisco and Audrey will join InterVarsity’s ministry on community college campuses there. Working with faculty will continue to be a key part of her ministry.