Changing Africa One Story at a Time 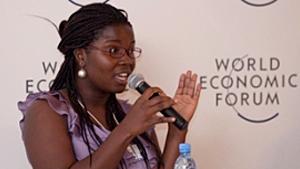 And as the founder and executive director of Golden Baobab, an organization that awards three annual prizes to the best authors and illustrators on the African continent, she has a powerful story to tell—one of disappointment, faith, and grace.

A Childhood of Books

Deborah’s life has always been full of stories. As a child growing up in Ghana, she read everything she could get her hands on, from Bible stories to Nancy Drew mysteries to romance novels to Christian fiction. “I had a very intimate relationship with books,” she says. “In reading I got to go on all these journeys by myself in my own imagination. . . . My head was such an interesting place to go back to.”

But books weren’t just interesting to her; they also encouraged her to trust Jesus more deeply. Though she grew up going to church and having strong faith modeled to her by her mom, being a Christian didn’t seem very cool to her as a child and middle schooler. But in Christian books that she read, “the authors would talk about the deep peace people would have when they came to faith,” she explains. “That made me yearn for some of that.” She began to embrace and press into her faith in new ways.

Upon arrival at Bryn Mawr College, an all-female campus in Pennsylvania, she knew she wanted to be part of a Christian community. At the recommendation of a friend, she joined InterVarsity. “A lot of my Christian growth has been around community,” she reflects. “The InterVarsity women I met as a freshman were these older women who were so beautiful and so happy and so real who loved God. . . . To see their life experience and have them share about it drew me into a very trusting family that I benefitted so much from.”

As a lover of books, Deborah was delighted not just with her mentors in InterVarsity, but also with one of its central activities: manuscript Bible study. In her words, “it was incredible.” She invited several friends to chapter camp her junior year, and started a Bible study called BOYL: Bible Study of Your Life. “BOYL gave us a space where we could take our friendship to a deeper level,” she says. It also took Deborah to a higher level of leadership and growth in her faith. “I started as a member—being cared for and shepherded,” she says. “Then, as a leader, I became the one to care for and shepherd others.”

Those leadership skills served Deborah well in other arenas. While at Bryn Mawr, she started a student organization that collected donated books and sent them to various African countries. She realized, though, that virtually all the books they were sending were Western books—the same books she had grown up with. So she took her organization a step further, starting a literature prize, the Golden Baobab Prize, to encourage African writers to write children’s books.

By the time her senior year of college arrived, Deborah strongly sensed God’s leading to focus on developing Golden Baobab as a full-fledged, ongoing organization. She had no idea what a test of faith that process would be.

The first priority was finding funding, so she spent much of her senior year applying for a large grant that seemed like a perfect fit to fund Golden Baobab. “I believed I had God on my side,” she recalls, “and I thought I aced the interview for the grant.” But she ended up not even making the cut to the second round. “That was a very big blow to my faith,” she says. Having always been taught that if she worked hard enough at anything she’d get it, she couldn’t understand how she could have worked so hard and sensed God’s leading so strongly but still be rejected for the grant. “I didn’t even know what to say to God for a while; I decided that the voice I thought had been his must not have been.”

With graduation approaching, she began sending out applications for jobs, but nobody called her back. She also kept applying for grants. In the end, she received three grants for Golden Baobab that, together, came to about the same amount of money as the first grant she’d applied for. And the circumstances of these three grants allowed her to go home to Ghana after graduation, which would have been impossible if she had won the first grant. “It was a very interesting faith journey,” she recalls. “My faith took the harshest battering, and out of nowhere came a better solution than the one before. I was happy . . . but it was difficult for me to go back to fully believing in God’s sovereignty.”

With her faith still a bit shaky, she returned to Ghana to learn more about the children’s literature industry and to continue to raise funds for Golden Baobab. She found out about another huge grant—three days before the deadline. “I applied to be respectful [to the friend who had told me about it],” she says. But it felt like a joke to her even to apply, as she’d be competing against people who’d spent months working on the application. “I sent it in and completely closed my mind,” she says. “There was no way I was going to get it.”

After each round of cuts—from 3,000 applicants to 200 to 22—she was still a contender, despite her unbelief and comparative lack of preparedness for each stage. Hope but also fear of being disappointed battled inside her. “Being in the top 20 was battering to my unbelief,” she says. “I didn’t know what to do. I couldn’t go back to not believing, because [making it that far] was certainly not me. I was competing against lawyers and business graduates—people who were top dogs.”

The phone call that informed her she was the winner of the grant was cause for rejoicing—but, she says, “that left me even more confused. I hadn’t believed enough, and it wasn’t my capabilities [that won me the grant]. It was sheer grace. And I didn’t know what to do with grace.”

Changing the Face of African Literature

Now, several years into Golden Baobab’s life, Deborah continues to see God’s grace at work, providing what she needs to persevere and overcome obstacles. Twelve Golden Baobab Prizes have been awarded since 2009 for the best stories in three categories: best story for ages 8–11 (Junior Category), best story for ages 12–15 (Senior Category), and Rising Writer (a writer who’s 18 years old or younger). Stories that have been submitted range in genre from African sci-fi to African retellings of traditional fairy tales. Winners are connected to literary agents and publishers who can help turn their stories into actual books.

Though the work is hard and the days are long, Deborah loves that she’s helping artists—writers and illustrators—live out their dreams of being published. And she loves that children all over Africa are experiencing the power and beauty of stories told from their own cultural framework. “Books give you the power to feel so many different things out of your own imagination, . . . and to be the director of what happens in your own head,” she says. “So many children in Africa . . . have never had choices. But in books, they can; they can transport themselves wherever they please based on the book they choose. . . . That can be very special.”

Deborah still draws on the lessons of faith she learned early in Golden Baobab’s existence. “So much of myself has gone into this,” she says, “but I recognize that so much of it could disappear. . . . I don’t have any control, essentially. I have to work on faith every day, believing that . . . God is sovereign, and that he will make things work out by his will and by his grace.”

For this lover of stories, that one—the ongoing story of faith and grace God’s been writing in her life, from childhood books to InterVarsity to helping others realize their dreams through Golden Baobab—may turn out to be her favorite one of all.