Chapter Camp: Powerful Moments of Clarity on Character of God 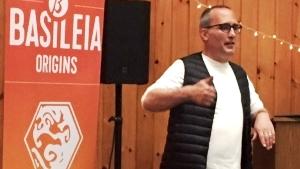 Deep in the Adirondack Mountains, on the shore of a scenic lake, about 100 InterVarsity students from New York and New Jersey campuses spent a week in May in the gym at Young Life’s Saranac Village camp. They divided into 12 tribes, “stoned” prophets with paper wads, and engaged in other experiential activities to help them better understand the Old Testament.

“What was really beautiful from my perspective is that students began to see the same character of God in the Old Testament that they see in Jesus,” Jason said. “When students begin to see that, it is really powerful. I think that happened when they began to see that the loving kindness, faithfulness, longsuffering, and generosity of God isn’t a New Testament idea. It goes all the way back to Genesis.”

InterVarsity’s Chapter Camps are famous for immersing college students in a week-long, in-depth Bible study of the Gospel of Mark, but other portions of Scripture are also studied. Often students have the misunderstanding that the God of the Old Testament is different than the God of the New Testament. The Origins class shows that God’s character is consistent throughout the Bible.

During Basilea, Jason shared comments on Facebook from students about how their week away from campus was changing their lives, including one from Rutgers student Chenghui: “I learned from Basilea this week that God is gracious and holy, to be revered and feared. But I learned from Origins track that he is not just a God of judgment but also a God of mercy and grace. His love is actually far greater than I could have ever imagined.”

Jason described another student who made the connection at the beginning of the last day of the class. “He had one of these powerful moments of clarity,” Jason recalled. “He said, ‘I never really understood the New Testament before; now I get it. I’m so excited to go back and lead my fellow students in studying the Old Testament and understanding who God is from that perspective.’”

Seventy colleges in New York and New Jersey have an InterVarsity presence. Most sent representatives to one of the three weeks of Basileia. This was Jason’s first chance to teach Origins. “Having seen how transformative it was for the students, we will absolutely teach it again,” he said.

After all, how often do you get a chance to stone prophets?