Chapter Planting: What Did We Know About Starting From Scratch? | InterVarsity
Skip to main content
By Gordon Govier

Chapter Planting: What Did We Know About Starting From Scratch? 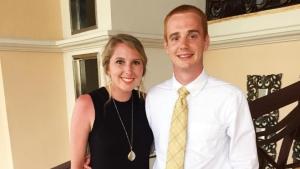 Renee McCrory decided to join InterVarsity staff at the end of a long day at her sales job. She was driving to George Mason University (GMU) where she led a small group Bible study started by her church. “I realized that this could be my job,” she recalled. “I love it, so I thought, why don’t I do it fulltime?”

She turned in her two-week notice on the same day that she made the biggest sale in her company’s history. She and Matt, who is now her husband, also decided to get married at about that time, and join staff together.

Matt started college on the GMU wrestling team but dropped out to attend a community college, and then ended up at James Madison University (JMU), where he got involved in InterVarsity and met Renee. They both became InterVarsity leaders at one of InterVarsity’s largest chapters, which typically numbers over 500 students.

“I fell in love with college ministry,” he said. But he didn’t feel ready to join InterVarsity staff upon graduation. So instead he went to work at a large northern Virginia church. As much as he liked working in a church setting, he eventually realized that the church’s campus ministry fell short of what he had experienced in InterVarsity.

Renee and Matt spent their first year on staff in North Carolina, wrestling with the challenge of returning to GMU to plant a chapter. They and their supervisors had a lot of questions, such as, “We had been students in a large long-established chapter; what did we know about starting from scratch?” Yet they couldn’t give up the idea.

“We said Mason seemed really hard but we would be willing to go there,” Matt said. “It's the largest public university in Virginia, and one of the most diverse colleges in the world. It’s almost totally unreached; we thought it was crazy that no one was there.”

Cru has a chapter at GMU but most other ministries that had tried to reach the campus had failed. Even the church that Matt and Renee were part of pulled out their campus ministry.

Other staff in Virginia quizzed their students for names of contacts at GMU. When Matt and Renee returned to the campus in 2013 they found four students from that list who bravely agreed to attend Chapter Camp and embrace the vision of planting a new GMU chapter.

When school started in the fall they made two sets of signs that said, “Does God = Love?” and took them to campus. They invited any students who responded to their question to a small group Bible study.

“We didn’t actually have small groups set up,” Renee said. “We hoped that if we invited enough people to a Tuesday night study, the first person who had said yes to coming wouldn’t be the only person who showed up.”

“It was scary to invite people to nonexistent things,” Matt added, but students came. After long days of campus conversations during the day, small groups at night, and social activities on weekends, they had three small groups organized. One fizzled out, but the other two succeeded. In fact, they had to split one group as it grew larger and larger.

They saw God answer their prayers and give them confidence through an awkward time. “It was very faith-building to see the Lord bring something out of nothing,” Renee said. “We had so many doubts about whether we could plant or not. I think the Lord met us in our inability.”

“I was amazed the whole year,” Matt added. “It was really students who were willing to take risks that made it succeed.”

Even today, five-and-a-half years later, the chapter is thriving because students are still willing to take risks. After many prayers for more Greek men to join small group Bible studies, one chapter member decided to join a fraternity himself. Now he’s in a small group Bible study that is steadily growing, and taking other fraternity members with him to Greek conference.

Although there’s a weekly large group meeting, the vibrancy of InterVarsity at GMU comes from the small groups. After their freshman year, many small group participants become leaders of new small groups. However, it’s not unusual for them to also remain in their first group. Matt quoted one student, whose mother thought two small groups might be too much: “Mom, I just invested a year of my life into these women. I'm not going to leave this small group,” she said.

As the chapter embraces InterVarsity’s 2030 Calling to reach every corner of their campus. Matt and Renee have found the most success at GMU by having students use their friend networks, rather than pre-selecting target niches. “Each of our small groups is intentionally thinking about how they can incarnate on campus,” Renee said. “We’re inviting students to invest in the communities on campus that they’re a part of and see what the Lord will do.” Students are starting groups for people they know in their dance class, or their international student friends, for example.

When Matt and Renee look back on the past five-and-a-half years they are amazed at how they have been able to see God at work. They didn’t know it at the time but only one of the four students they started with was actually a committed Christian believer. More than 100 decisions to follow Jesus have been recorded so far, including two more of the original four. Last year the GMU chapter had 180 students. The newly converted and not-yet-converted made up 38 percent of the chapter. There are currently 13 small groups.

Combining what they learned during their student experience at one of the nation’s largest chapters, with their training as part of InterVarsity’s 2013 planting cohort, has resulted in transformed lives and the beginning of a culture change on the GMU campus. “We want to make disciples in four years so they can live out their faith in the next 40,” Renee said. “We’re seeing it happen.”