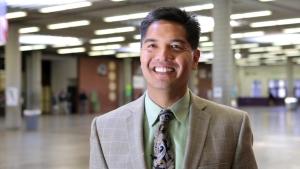 Not every graduate of Sacramento High School (Sac High) chooses to attend California State University, Sacramento (Sacramento State). But because of people like Sacramento State alumnus Ed Manansala, Sac High students now have a much better chance of getting a college education.

A dozen years ago Sac High was a failing public school. In 2003 it was actually closed by the school board but it reopened later that year as a charter school, operated by a new organization, St. Hope Public Schools. Over the last ten years the rate of Sac High students attending college has grown from 20 percent to 93 percent. Ed was one of the key educators responsible for the turnaround.

Ed was introduced to the Oak Park neighborhood that surrounds Sac High as a college student, during an InterVarsity Urban Plunge. InterVarsity Bible studies also shaped his concern for the underprivileged, so after he graduated he moved to Oak Park. A friend told him that the best way to help the children of Oak Park was to get involved in either the juvenile justice system or education. He chose education.

When Sac High reopened as a charter high school Ed was in the right place at the right time. Kevin Johnson, the founder of St. Hope Public Schools, knew he needed leaders with vision, tenacious dedication, and tireless energy to turn around the school. Ed became one of the school’s co-principals and later superintendent of St. Hope Public Schools.

"We believe that being a leader is putting others before self and service before others; that's the motto of Sac High and Ed lived that," said Kevin, the former NBA star who has since become mayor of Sacramento. “That consistency and authenticity gave kids a sense of possibility, a belief that anything was possible."

Antoinette Bailey-Weathington was confused and felt lost as a Sac High student. College seemed out of reach. Even graduating from Sac High looked unlikely after she was the victim of a shooting at a party and later became pregnant.

Ed began mentoring her, not only in school but after school. "This was a person who not only loved me as a student, he loved me as a family member," she said.  Now, after graduation from Sac High, Antoinette is working two jobs, taking classes, and caring for her family. She is focused on earning a degree in early childhood education from Sacramento State.

“He expects a lot from you but you know that's good,” said Ashley Leach, another student who benefitted from Ed’s leadership at Sac High. “He's someone you know you can go to for help.” Ashley is now active in the InterVarsity chapter at UCLA.

As an InterVarsity student at Sacramento State, Ed participated in the daily noon prayer meeting on campus. It helped him become more sensitive to what God was doing around him. It was good preparation for his future role at Sac High. "Prayer was central for me personally, to be able to be effective professionally,” he said. "I depended on God not by the hour but by the minute."

Today Ed serves as deputy superintendent in the Education Services department in the El Dorado County Office of Education. His commitment to serve children in urban setting continues.  "A quality education creates an opportunity to break cycles of poverty,” he said. “I sensed a clear call and commission to this community and to my educational role."  Students past and present – who have achieved more than they ever dreamed – are glad he obeyed that call.