Dreaming of Growth for Campus Ministry 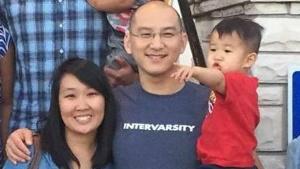 Andy Wong remembers his first InterVarsity Chapter Camp. He was part of a newly affiliated Asian American chapter at the University of Texas at Austin.

And it was at Chapter Camp that for the first time, he had a sense of being Christian on campus as part of a national movement. “It was kind of eye-opening,” he said.  And, also for the first time, he received leadership training. “I walked away from that experience feeling equipped to lead a small group, and it felt good.”

From that point on, he was involved in a fellowship with a sense of purpose. “That challenged us to consider what being a missional presence looked like,” he said. “It changed the course of some of the things we were engaged with.”

It also changed the course of Andy’s career. He had changed majors several times and even left school to work in a tech job for several years. But as Andy was invited to become a chapter leader and then was mentored by his InterVarsity staff worker, he was encouraged to consider joining InterVarsity staff after graduation.

It was at Urbana 03, InterVarsity’s student missions conference, where he realized more deeply the significance of InterVarsity’s impact on his life and had his call to go on staff confirmed. “I had a sense of God saying to me, ‘Look at what I’ve done in you. How could you serve me to do that for others in reaching the campus?’ It was compelling and convicting; that’s why I’m still in campus ministry,” Andy said.

Andrea Thomas, InterVarsity’s director of marketing and one of Andy’s former supervisors, calls him a maven—an expert in chapter growth who enjoys sharing his expertise with others. “As a Campus Staff Minister, Andy led the largest Asian American chapter in the country to become even larger and more focused on sharing the gospel,” she said. “Now, as the Area Director at UT Austin, he’s leading a huge multiethnic ministry at the alma mater he loves.”

With a South Asian chapter, a Black Campus Ministry chapter, and a LaFe chapter for Latinos, all of which started at about the same time the Asian American chapter affiliated with InterVarsity, plus an International Student Ministry chapter and a multiethnic chapter at UT Austin, Andy believes that InterVarsity is uniquely positioned to help students address difficult race and identity issues as they share the gospel message.

He also believes InterVarsity has some of the best training available for students to help them develop into culturally competent witnesses to the gospel, on campus and beyond. “Our student leaders are developed and trained and then we send them out into the world, to serve in the church and in the marketplace,” he said. He particularly enjoys hearing about InterVarsity alumni who become leaders in their churches, because that also reflects InterVarsity’s vision.

About 500 UT Austin students are involved with InterVarsity one way or another. Andy is also nurturing two new chapters, one at Texas State University at San Marcos and one at St. Edward’s University in Austin.

In addition, the UT Austin staff have just begun a new campaign called Even Greater to engage more alumni as ministry partners to support InterVarsity activities at UT Austin. “We’re sharing the vision of reaching the whole campus and inviting alumni to partner with us," Andy said.

Andrea’s husband Jason Thomas, InterVarsity’s National Field Director for the south central U.S., said that Andy is having a national impact on InterVarsity’s ministry through his membership in the National Chapter Growth Steering Committee. “He uses his design and technology skills to produce high-quality growth resources that are being used around the movement. He loves to make anything he gets his hands on more efficient and relevant,” Jason explained.

Andy admits he enjoys wrestling with a good challenge. “I love working with staff on problems and dreaming of something big,” he said.

With 55,000 students, UT Austin is the fourth largest campus in the U.S. Andy is in the right place.

Keywords:
University of Texas at Austin