Encouraging the Vitality of the Church 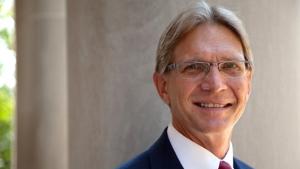 Scott Sunquist’s story is one of walking by faith and not by sight. And it’s a story of blown expectations, surprises, and unexpected blessings.

Listening to him reflect about his life over the last 37 years, you could chalk Scott’s path up to coincidence, but that would discredit the very real and undeniable call of God upon his life. From an InterVarsity staff member to a missionary in Singapore and back to the United States as a professor, his résumé is impressive, but his manner is gracious and humble.

Very soon after marrying his wife, Nancy (a 1976 alumna from UNC), the two went to Urbana to discern God’s call on their life. Together they signed the commitment card that every student at Urbana receives, agreeing to go anywhere in the world God called them without knowing where or when or how. That little yellow card set the stage for the next 37 years of their life.

To prepare for mission work, Scott joined InterVarsity staff. His undergrad chapter at the University of North Carolina had shaped his understanding of Christian life and mission, and engaged him in thoughtful study of Scripture. As a staff member, that legacy of thoughtfulness continued to inform him; he learned how to lead and teach in ways that have influenced him throughout his life.

He reflects that InterVarsity taught him things like how to lead a discussion with students and the importance of taking time every year to write down personal goals and objectives. These things were helpful in pursuing mission work later. But he needed to do more study. With the wisdom of Dave Howard (another InterVarsity staff person) ringing in his ears, he decided to pursue graduate work and eventually an M.Div., taking a special interest in church history.

After completing his graduate work, Scott and his family were finally ready to follow through on their commitment to do overseas mission work. So they moved to Singapore, where Scott trained Asian leaders, missionaries, and pastors.

But he was soon filling many other roles as well. The draw he had felt toward church history took on new significance when he agreed to lead the effort to create a dictionary of Asian Christianity. He also pastored a church, because many of the congregants were new believers themselves and were not trained to pastor. And he started two other churches, as well as formed friendships and connections with people all over Asia. He says of his growth during that time, “Other projects came to me and I just had to respond. If there was no one else to do it, then I would. I was no longer only teaching and pastoring; I became a scholar.”

Scott eventually returned to the United States at the invitation of Pittsburgh Theological Seminary to be a professor. At first reluctant, he eventually felt God’s clear call to teach at the seminary. But he continued to be marked by his time in Singapore. His knowledge of, and appreciation for, believers who make up the Eastern church has informed his role as a professor, and his passions in general.

It is the hubris of the Western church that thinks it has the corner on Christianity. Scott, on the other hand, not only acknowledges but also affirms the vitality and necessity of the Eastern church. When Scott was in Singapore, the zeal of the believers around him was magnetic and inspiring. He, his wife, and his four children all gained a lasting appreciation for the energy and tenacity of the church.

He’s convinced that the health of the worldwide Church is dependent upon being intercultural. He says, “One of the signs of decline in any church is when it becomes too locked into its local culture. The Western church has declined because we have assumed an imperialistic approach [to our own expression of faith] and have not assumed a posture of humility [in our handling of the Eastern church]. We need to listen and learn from the Christians in Africa and China and elsewhere. The gospel is always fresh and new.”

It is with this passion for the global Church that Scott took his most recent position as Dean of Intercultural Studies at Fuller Seminary in California. There, he teaches classes and supports staff in succeeding and thriving at what they do. He is in the unique position of encouraging and engaging with current seminarians as the Western church faces new and unique challenges. There couldn’t be a better man for the job.