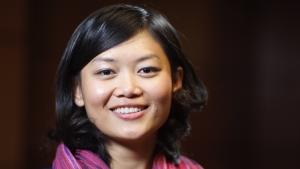 The distance from Myanmar to Missoula, Montana, is over 7,000 miles. InterVarsity alumna Wai Wai Tun traveled the distance in 2007, hoping to gain a great undergraduate and post-grad education in pharmacy at the University of Montana.

She got that and so much more.

The warmth and friendliness of Montana’s second largest city immediately drew her in, as did its beauty. People in Myanmar don’t generally talk to strangers, so having others—even those she didn’t know—smile at her and say hi was a welcome change. The colors of fall delighted her as well. “Fall in my country is not like here, compared to Missoula,” she said. “I always wanted to see the real fall. Here it’s real. And it’s beautiful.”

A Faith of Her Own

Even more, Wai Wai discovered a faith of her own, turning from the Buddhism she’d been raised in to faith in Jesus. “[In Myanmar,] once you’re born into a family you’re automatically a Buddhist,” she explained, “even though you don’t know what it really means to you. But being a follower [of Jesus,] I think the main difference is that you have to believe from your heart. You have to have faith. That will change your life.”

Wai Wai was not the only one who changed as a result of her faith, however. God used her to bring about change in the lives of many other international students on campus as she became involved in InterVarsity, led Bible studies, discipled friends, and influenced classmates.

Being Used by God

Now a licensed pharmacist in Washington State, Wai Wai longs to see her coworkers make the same decision she did regarding Jesus. “You can be in ministry anywhere,” she said. “God can use you in so many ways.”

In Missoula, in Washington, and in Myanmar—where she plans to return at some point to work in healthcare and education—God is clearly doing just that with Wai Wai.

Watch the video above to hear more of Wai Wai’s story.

God can use you in the lives of international students too! Find an International Student Ministries InterVarsity chapter near you!

Or read about other InterVarsity alumni who are integrating their work and faith, like this Detroit environmentalist and this businessman whom the Lord is using to change lives in Honduras through his toy company.