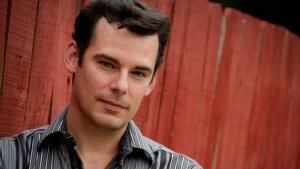 Los Angeles is not for the faint of heart. Anyone who has lived there, even briefly, senses the cynicism that fuels the culture. But for some, like InterVarsity alumnus Nathan Scoggins, pursuing a career as a filmmaker in the City of Angels is not only a choice but a calling. Nate and his wife, Kate, are intentionally creating a life that is not defined by chasing an often-elusive success but rather by serving and loving people well.

After just a few minutes of conversation with Nate, you get the sense that his life is fully integrated. No one part of his life is excluded from any other part. His faith, his family, his career—they all commingle in a beautiful tangle. His faith informs his filmmaking. As does his family.

Often, his family is involved in his productions in very tangible ways. Last year, Nate and a team of friends won the Doritos “Crash the Super Bowl” contest with their commercial called “Fashionista Daddy.” The commercial winks at Nate’s own reality, not only because he is the father of three girls who like to dress him up, but also because the child in the commercial is actually his daughter.

Although his daughters will happily participate in any project their dad works on, they would much rather be something other than actresses when they grow up—surely a relief to their father who knows all too well the realities of the movie industry. In the midst of success, he’s dealt with a lot of rejection in his work of writing, directing, and producing projects. “Hollywood is a town that loves to say no,” he quipped.

The constant rejection was challenging when Nate arrived in LA in 2002, after graduating from Wesleyan University and spending a year as a volunteer staff worker for InterVarsity. What kept him and his family going was their belief that God was not looking for him to succeed in the film industry, but instead to be faithful. They know that God loves him regardless of what he achieves and that God has more for him than getting films made.

That is a message that needs to be embraced by a wider audience. Hollywood is full of people trying to make it, many of whom are running from hurtful pasts fraught with rejection. Nate and his wife have made a habit of creating safe spaces for people to be themselves and loving them amidst and despite the past and present rejection they live with.

Nate’s first big break came in 2007 with a movie that he wrote and directed, The Least of These. The movie follows a priest who returns to his former high school and uncovers a mystery related to the Catholic sex abuse scandal. The film mattered to him not only because it has led to more “yeses” and less “nos,” but also because it entwines issues of faith, justice, and truth with complex characters who are dealing with controversy.

The Art of Deep Truth

At a friend’s wedding some time ago Nate mentioned to someone that he was a filmmaker. “Oh, you lie for a living,” they said. It’s a judgment Nate faces often, but he bristles at that characterization. Filmmaking is an art form. And like other art forms, filmmaking communicates deep truths, whether or not the events really took place. “Jesus was a storyteller,” Nate said. “He painted pictures of what could be. I want to tell stories about what is possible.”

In all of the projects Nate has been a part of, faith has had a role to play—whether large or small, perceptible or not. He remembers Erwin McManus, pastor of MOSAIC church in LA, saying that every human has three needs: to believe in something, to belong to something, and to become something. The best part of being a storyteller, Nate reasons, is finding stories that reach those core human needs.

He often ponders those needs through the lens of Romans 4:17, in which Paul states that “God . . . gives life to the dead and calls into being things that were not.” Reflecting on that favorite passage, Nate said, “The idea that God makes the invisible, visible—that’s what storytelling is. That’s what creating is. And every day I get to be a part of that.”