The Future of Chapter Planting 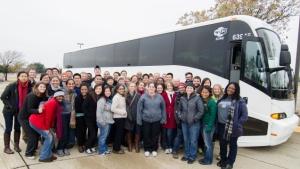 “We don’t think of students as sheep to be gathered, but as seeds to be scattered.”  -  Shawn Young

Over the past eight years, planting chapters has become a major focus of the Fellowship. With so many unreached students and faculty across the nation, establishing new witnessing communities is central to our mission.

In a recent conversation with Shawn Young, our National Director of Chapter Planting, I discussed the future of this initiative. Where do we sense the Spirit leading us next? How is our model changing? How enthusiastic are staff about moving to new campuses?

Our Dream
InterVarsity chapters currently exist on about 600 campuses. While we have committed to a specific plan for the next five years, we dream of planting even more chapters. While this is certainly ambitious, our vision has precedent. After establishing Christian communities in the eastern half of the Roman Empire, the apostle Paul looked west:

From Jerusalem and as far around as Illyricum (modern Croatia) I have fully proclaimed the good news of Christ. Thus I make it my ambition to proclaim the good news, not where Christ has already been named, so that I do not build on someone else’s foundation… when I go to Spain…”1

Someday we hope that every one of the 4,000 American campuses will have a significant Gospel witness. While reaching out to more campuses will be a stretch, Shawn is deeply encouraged by a meeting of 25 Area Directors in Chicago last month. This relatively small group alone identified 281 campuses where they hope to plant in the near future.

Refining the Chapter Planting Model
In 2006, our first national chapter planting cohort was launched. To date, 134 chapters have been planted via eight national cohorts. Cumulatively, these chapters have added 4,116 core students and faculty and 1,384 new believers.

While Shawn plans to continue recruiting 20-25 planters for the national cohort each year, he is also expanding the model to include new ideas. Five stand out:

U of Arkansas
In late November, 51 Red River region staff boarded a chartered bus for a four day trip to the University of Arkansas (see photo above). Their goal: replant our chapter in Fayetteville. Fifteen gracious families hosted them in their homes.

For a full day, staff descended on campus – interacting with hundreds of students via proxe stations and informal conversations. Not only were 25 missional students identified, but great contacts were made with faculty and administrators who serve athletes, Black, Latino, Greek and international students.

In the near term, the chapter will be served by volunteer staff member, Joseph Pao-Wu. Bless you Joseph! And bless you Red River staff!

Ambition Conference 2015
Two years ago, Shawn hosted our first ever national conference for chapter planters. Expecting 150 participants, he was stunned when 330 staff, student leaders and volunteers showed up. A second conference, Ambition 2015, will be held next year at this time, January 15-18, 2015 in Tampa.

At Orientation for New Staff last summer, I was pleasantly surprised by the number of incoming campus staff who felt called to plant new chapters. I see this as the Lord’s renewing hand on our community. And it is wonderful!