In Her Own League 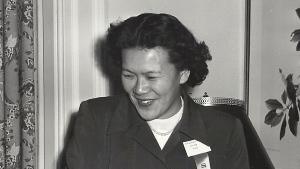 One of InterVarsity’s early staff members turned down a budding professional sports career in order to take student ministry to new campuses in the U.S. and eastern Asia.

Gwen Wong was a left-handed rookie pitcher for Chicago's Bloomer Girls softball team in the summer of 1947. League records give her 14 wins against nine losses. It was the only season she played because her primary focus was on God’s call to ministry.

Gwen grew up in California, a second-generation Chinese American. Her parents worried about her losing touch with her heritage and sent her to a school run by a Chinese church to learn Cantonese. She became a follower of Jesus at that church while in Junior High School.

At the University of California-Berkeley, she started to drift away from the faith until she met some students involved in a Christian fellowship group that later affiliated with InterVarsity. "I came to know the Lord again, and felt a call to do student work in China, because I was Chinese," she said.

The year before she graduated from Berkeley, and two years before her short professional softball career, she went to InterVarsity’s Campus in the Woods in Canada. "Spending a summer there was a terrific thing because we got a lot of Christian training: a lot of apologetics and a lot of inductive Bible study," she said.

At Campus in the Woods she met Stacey Woods, InterVarsity’s first leader. She also learned about Biblical Seminary in New York, where students (including many future InterVarsity staff members) were being taught inductive Bible study methods.

Gwen said that the main reason she played for the Bloomer Girls was to help finance her seminary education. Women’s professional baseball and softball became popular during World War II and was still going strong at that time (as depicted in the film A League of their Own).

Upon her graduation from Biblical Seminary, Stacey Woods invited Gwen to join InterVarsity staff and assigned her to develop student ministry at the University of Hawaii. She was the second Asian American staff hired by InterVarsity.  Hawaii was not yet a state at that time, and her training was mainly on-the-job. "Hawaii was a wonderful experience,” she said. “I grew in the Lord."

Pioneer in the Philippines

Hawaii was a step in the direction of China. But China was closed to missionaries in the early 1950’s, when Gwen was ready for a new assignment. In 1952 she went to the Philippines through the International Fellowship of Evangelical Students and began student ministry there.  “Our first Bible studies were in my car in the parking lot, because the school wouldn't let me on campus,” she said.

In 1956 she was joined by a friend from her Berkeley days, Mary Beaton. InterVarsity Christian Fellowship in the Philippines remains a vital ministry today because of the foundation of indigenous leadership established by Gwen and Mary before they left in 1959.

Under IFES sponsorship Gwen traveled to Taiwan, Korea, Hong Kong and other parts of Asia to do student ministry. She also worked with InterVarsity in southern California in the early sixties before moving on to another career.  Now retired, she remains active in her church, Journey Evangelical Church in Westminster, CA. She still enjoys teaching inductive Bible study to groups in the church. 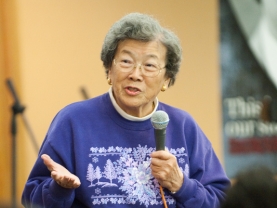 She has been blessed to occasionally meet former students from across Asia who have thanked her for helping them learn inductive Bible study. Some tell her that they call it “the Gwen Wong method.” She is pleased to see that God is still at work on campus through InterVarsity and IFES.