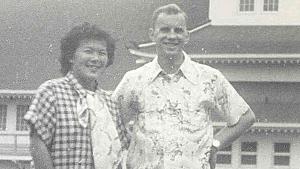 Gwen Wong was InterVarsity’s second Asian American staff member and was known throughout her adult life for her love of teaching inductive Bible study. She was also known at one time for her fastball. She left this life for her heavenly reward on September 21, 2018. She was 94 years old.

Gwen was introduced to inductive Bible study at InterVarsity’s Campus in the Woods in Canada in 1945, while a student at the University of California—Berkeley. She decided to attend Biblical Seminary in New York to learn how to teach inductive Bible study. To raise money for tuition, she spent the summer of 1947 as a pitcher for Chicago’s Bloomer Girls professional softball team.

Gwen felt that God had called her to work with students in China, but when she graduated from seminary China was closed to missionaries. She accepted Stacey Woods’s invitation to join InterVarsity and pioneer student ministries in what was then the US territory of Hawaii, as a step towards China.

After four years on US staff she moved even closer to China in 1952 when Stacey Woods sent her, through the International Fellowship of Evangelical Students (IFES), to pioneer student work in the Philippines. Joined by her friend and coworker Mary Beaton, ministry in the Philippines flourished.

Seven years later, Gwen and Mary left InterVarsity Christian Fellowship Philippines in the hands of the leaders they had mentored and moved on to other assignments. Stacey Woods later described their work as “a classic example of the New Testament pattern of those who could found a work and then move on, instead of following the disastrous pattern of so much missionary paternalism.”

Working with IFES, Gwen continued student ministry and teaching inductive Bible study in Taiwan, Korea, Hong Kong, and other parts of Asia. However, she did not think of herself as a missionary. In a 2015 interview she said, “I just thought of myself as an InterVarsity staff member.” In the photo above, she is shown with Robert Finley, InterVarsity’s first evangelist, who also ministered in many parts of Asia after leaving InterVarsity staff.

In 2010 Gwen was honored for her pioneering work with InterVarsity at a meeting of InterVarsity’s Asian American Ministries staff team. Lisa Espineli Chinn, former director of InterVarsity’s International Student Ministry, grew up in the Philippines and views herself as part of Gwen Wong’s legacy. Her older sisters were part of the campus Bible study led by Gwen.

“Gwen truly knew what student initiative was, what empowering national people meant,” she said. “Gwen left the Philippines in the hands of indigenous leaders and it is still a thriving student movement to this day. We owe her a great debt of gratitude.”

You can read more about Gwen in this 2010 article on our website. A memorial service was held October 13, in the chapel at Evergreen Cemetery, Los Angeles. In lieu of flowers, donations are being accepted for InterVarsity Christian Fellowship/USA.