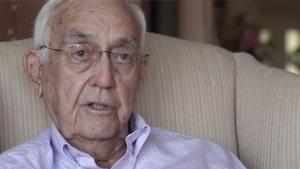 “He knew my family,” Don recalled. “And he knew I had just transferred from Wheaton to the University of Michigan. All I remember is that he approached me to say, ‘We're starting an InterVarsity here, and would you please lead it?’ And that's how I got started with InterVarsity.”

Stacey Woods may not have known that Don had been in an evangelistic quartet with a young Billy Graham at Wheaton, but it was soon clear that Don was a strong leader. The young chapter in its first year ambitiously sponsored a lecture series outreach, featuring three evangelical professors from other colleges. Banks of typewriters were set up to type personal invitations to all of the students, and the 1,000-seat lecture hall was full for all three lectures.

The next year the head of the Religious Studies department told Don that the department had its own lecture series and InterVarsity would not be allowed to compete with it. So Don decided to go to the top and scheduled a meeting with University of Michigan president Alexander Ruthven. An all-night prayer meeting was held the night before the Saturday morning appointment.

The next morning, when Don and another student walked into the president’s paneled office, the president observed that they weren’t attending the annual Ohio State/Michigan football game. But then he surprised them and said, “Fellas, I’ll never go to another Ohio State game, because of the way our students were acting up, and the drinking and everything that was going on.”

“Dr. Ruthven, that's exactly what we came to talk to you about,” Don responded, explaining their plans for the lecture series. At the end of the meeting, Dr. Ruthven told them, “Gentlemen, that's exactly what we need on this campus. You have my permission.” Dr. Ruthven also offered to host the speaker in his home for the weekend, an offer that was repeated for the following year’s lecture.

The Michigan chapter started out with about 50-60 students, who met regularly on Sunday evenings. Several Bible studies began in the dorms. The chapter was encouraged by occasional visits from Stacey Woods but was otherwise totally student-led.

As Don left the University of Michigan and began his dental practice in his hometown of Detroit, he stayed involved in ministry activities. He taught a regular Sunday school class in various churches for 65 years, and mentored young people through the churches. He served and chaired the boards of several ministries, led a regular prayer meeting with Christian businessmen, and participated in a number of overseas ministry trips.

After Don retired from his dental practice, he and his wife, Joyce, moved to Florida, and once again sought out InterVarsity. They wrote a letter to the local InterVarsity Area Director and asked if there was a role for them as retirees.

There was. They became volunteers, working with the Edison College chapter at Fort Myers for four years (renamed Florida Southwestern State College earlier this year). They were concerned about the extreme age difference, but the students seemed to enjoy having someone the age of their grandparents to talk with. “We became Christian grandparents to that whole group of kids,” Don said.

They were on campus three days a week, meeting with students and attending prayer meetings and other events. “We saw kids really grow in the Lord,” he said. “It's been thrilling to see Bill Harward come in and take over that work and also the work at Gulf Coast University. He's doing a fabulous job. Kids are coming to Christ there, where we started at Edison.”

Don told more stories about how God had guided him through many ministry opportunities during his time on campus and in the military in this interview and a subsequent video interview with InterVarsity’s twentyonehundred productions. “InterVarsity made me fearless for the rest of my life,” he said. “If God could do that, with a couple of kids on the campus of the University of Michigan, he could do anything. I had to stand on my own two feet but the Lord won the battles.”

The next day after his video interview, Don died in his sleep and passed fearlessly on to glory. He was 93 years old. We are so thankful for the example established by Don, Stacey Woods, and the other pioneers who responded to the spiritual needs of the campus and laid the foundation for all that InterVarsity does in our campus ministry today.

View the video that goes with this story.