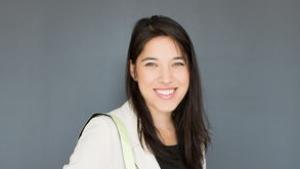 “In a domino effect, InterVarsity’s New York City Urban Plunge has led me to where I am now,” said Alissa Moore, who is the cofounder of Nomi Network, an innovative nonprofit that creates jobs for at-risk women and survivors of human trafficking. Her InterVarsity chapter encouraged her to sign up for the spring break trip during her sophomore year at Skidmore College. She expected it to be like any other service trip—the familiar routine of lending a hand.

But the discussions and Bible studies, which challenged her to think about her faith and biblical justice, significantly affected her future. “I’m only three years out of college,” she said. “I did not come to New York thinking, ‘I’m going to start my own nonprofit,’ or ‘I’m going to work with the Urban Project to provide students with internships.’”

Originally from Seattle, Alissa was attracted to Skidmore College in upstate New York because she thought the small size would create a tight-knit community of professors and classmates. In reality, she struggled with loneliness, and the opposition to Christianity on campus made her wonder if her faith was worth holding on to.

She went looking for support and found an InterVarsity chapter of seven students. The small fellowship allowed Alissa to wrestle with what she believed. Through the relationships she built, her commitment to follow God deepened. After her experience at the Urban Plunge, Alissa wondered how she should respond to what she’d learned. Her heritage as a half-Japanese and half-Caucasian woman made her sensitive to racial prejudice, and the Urban Plunge gave her a biblical lens with which to view injustice.

Alissa attended Urbana 06 to learn more about missions like the Urban Plunge. Though she had been on several service-oriented trips, she sometimes questioned if missions was innately ethnocentric. Hearing the speakers and participating in the discussion groups at Urbana 06 began to change her perspective. “It was the first time I heard people say, ’I want to be a missionary because I care about this individual and I see God in them,’” said Alissa. The conference gave her a picture of a global church sharing the gospel with both words and actions.

A New Way to Do Business

Urbana 06 also introduced Alissa to the issue of human trafficking. She was shocked by the stories she heard from former victims, and she wanted to help.  After graduating in 2007, she met Diana Mao at a weekly prayer meeting through their church. Diana had recently returned from Cambodia. She showed Alissa a wooden business card holder that she thought had high sales potential in the U.S. and could create job opportunities for trafficked survivors.

With Diana’s background in business and Alissa’s interest in design and fashion, they developed a business plan. They would connect design manufacturers in the U.S. to overseas NGOs, providing fair trade products for the U.S. market and employment for trafficked victims and at-risk women. In the spring of 2009, Nomi Network was incorporated.

At times, the journey has been difficult. “Everything from the world’s standpoint says we shouldn’t do this,” said Alissa. “Some people say, ‘You should focus on your sales.’ To do that, you need to not care about whether you’re providing jobs.”

But Alissa wants Nomi Network to place women in jobs that care for their whole person. One of their partners, a factory run by Christian businesspeople from Australia, employs at-risk women, paying them standard wages and providing them with childcare and transportation. The women’s weekly routine also includes opportunities for Bible study, worship, and Christian community.

Though starting a nonprofit is a time-consuming endeavor, Alissa has kept in touch with her former InterVarsity staff and the current staff member at Skidmore. They are working on ways Nomi Network can partner with the growing InterVarsity chapter to reach out to students on campus. Last year Alissa attended Urbana 09 with some of those students and spent time praying with them as they pursued God’s calling.

Sometimes Alissa feels overwhelmed by her leadership role, but she believes that God can use her to influence the fashion and design industry. “If you are passionate about a certain industry that is pegged as exacerbating an issue, like labor trafficking, it’s an opportunity to unpack all the ways that industry could realistically make small steps towards big change,” said Alissa. Because of a decision to attend a spring break trip with InterVarsity, Alissa is able to give young women around the world the opportunity to have safe careers and dignified lives.