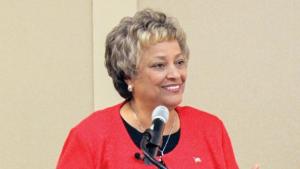 Kay Coles James clearly remembers the day that she gave up control over her future. She was attending Hampton University and had no idea that presidents and governors would some day be requesting her administrative skills.

Sitting with other students at an InterVarsity Fall Conference in Virginia, she heard the conference speaker describe the sacrificial death of Christ on the cross and realized that God had a calling for her life. She had committed her life to following Christ while watching Billy Graham on television before entering college. Now she realized that following Christ meant letting him lead.

“I said, 'God, I am available to be used by you. Here I am.' I did not have a plan beyond ‘What is the next opportunity to serve?’ If you're willing to do that and really mean it, hold on, because you don't have a clue as to where your life is going.”

Kay had no clue that three decades later she would be overseeing the 1.8-million member federal civil service as the Director of the U.S. Office of Personnel Management, appointed by President George W. Bush. Or that on the way to that office she would hold a variety of positions in local, state, and federal government, and serve on a number of government, non-profit, and corporate boards and commissions. She would also serve as Dean of the School of Government at Regent University, and as Senior Vice President of the Family Research Council.

"Over my 30 years in public service, if you take a complex, controversial, and difficult public policy issue, I've probably had my hand in it somewhere,” she said. “Whether it's health care reform, education reform, or welfare reform, there just aren't enough people who take the time to try and work through those issues. Being African American and female also caused there to be a higher demand for my participation.”

Despite her high profile resume’ and the fact that her children are now involved in public service, she does not necessarily recommend it.  That is, unless you are called to do it. “If you are called to do it, God will give you the grace to do it,” she said. “Everyone does not have the grace to do what I did. It's been amazing to me to watch how God has ordered our lives over the years, in order to allow our family to be involved.”

Today Kay has turned her attention to mentoring the next generation of African American leaders by founding the Gloucester Institute, which is based in Richmond, Virginia. The Institute follows in the footsteps of Dr. Robert Russa Moton, an African American leader of the early twentieth century who was committed to building bridges to solve the problems of society.

“After 30 years of being involved in government at the federal, state, and local levels,serving at the highest levels of some of America's largest corporations, and sitting on the board of some of America's most respected non profits, it occurred to me that probably the best way I could finish strong in the work that God has given me is to take what I have learned in all those sectors and give it to the next generation,” Kay said. “I am excited about what we're doing and so encouraged about the young people to whom we are passing the torch.”

Kay is still in contact with her InterVarsity staff worker, Bill York and his wife Elizabeth. In fact Kay named her daughter Elizabeth to honor their mentoring role in her life. She reflected on her experience with InterVarsity while a student at Hampton University and observed, “I needed a firm, well thought-out world view for the things that God was preparing me to do. I think InterVarsity is the best campus organization for getting that done."

UPDATE: In December, 2017, Kay Coles James was named president of the Heritage Foundation.