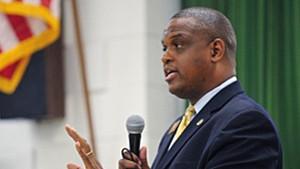 During the week, Otha Thornton helps U.S. Army soldiers at Fort Stewart, Georgia, prepare for overseas deployments through simulations developed by a private contractor. As a retired Lt. Colonel, Otha draws upon his Army background to help make the simulations as realistic as possible for the soldiers.

On the weekends, Otha frequently travels on PTA business. As the National PTA President-elect*, he has regular board meetings and other official events to attend. He also speaks at conferences around the nation, including Christian conferences such as InterVarsity’s Black Scholars and Professionals Conference in Atlanta, held on October 26-27, 2012.

Through his 21-year career in the U.S. Army, including serving as a Presidential Communications Officer in both the Bush and Obama administrations, followed by a deployment to Iraq, Otha focused on developing his leadership skills. “Leadership is the most important aspect of anything,” he said. “Leadership sets the tone and the environment.”

Otha’s development as a leader included his involvement with InterVarsity at Morehouse College in Atlanta. There he was mentored to be a leader by the late Alec Anderson, an InterVarsity Campus Staff Member. He became the leader of a Small Group Bible study and began to practice the discipline of daily Bible reading.

"Alec was a faithful and committed Christian man,” Otha said. “He spent time with us and encouraged us. He was an awesome guy. I could see my spiritual growth on an annual basis.”

As Otha continued to lead the Small Group Bible study through his time at Morehouse, he developed friendships that continue to this day, more than two decades later. Each month he is in touch with other members of the Bible study, including Duane Wright, who is now the Morehouse Controller and Associate Vice President.

The spiritual discipline he learned as an InterVarsity college student was extremely helpful to Otha  during his Army career. “The most important thing in combat is managing time,” he said. “When you're off duty, you determine what you feed your mind." By maintaining his Bible reading, having fellowship with other Christians, and attending chapel services, Otha stayed sharp.

In one of his last assignments in Iraq , Otha was responsible for casualty reporting, which included combat deaths and the movement of fallen soldiers from Iraqi battlefields back to the U.S. "That was probably the most stressful thing I did," he said. "As a Christian I knew that my soul was right with God, so I was calm in the combat environment, and it had a calming effect on people around me.”

Otha’s involvement with the PTA began when his daughter started school in 1995. In 2005, right after his family returned from an overseas assignment in Germany, his role began to change. Stationed in Maryland, with his daughter and son in a local school, he went to a PTA meeting to find out more about the educational activities and to get involved in the school. Only six other parents showed up at the meeting, and one of the six was the base commander.

His commander turned to him and asked, "Thornton, what are we going to do about this?" So Otha volunteered to be the PTA Vice President. As he applied his leadership skills to the local PTA unit, it began to grow.

"We moved from 25 members to 200 parents the first year,” he reported.” The second year we moved to 400 parents, and I was elected President." The PTA received a national award for the membership increase and Otha was invited to dinner by the National PTA President, Jan Domene, with other top National PTA officials. A month later he received a call from the national PTA office and was told, “the President wants you on her board."

Now, just months away from becoming President of a 5-million member national organization, Otha sees God’s hand leading him to his present position. "Over the years, God has prepared me to do what I'm doing now," he said. He is thankful for his InterVarsity experience, and his InterVarsity friends who have helped him to embrace the challenges and the opportunities that God has put before him.

* UPDATE: On June 23, 2013, Otha Thornton was installed as President of the National Parent Teacher Association - VIDEO via You Tube.