Randy and Meg Palisoc: Raising the Bar in Education 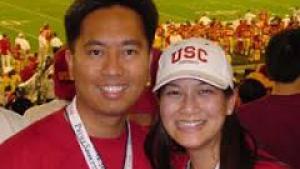 Synergy Charter Academy is making its mark in a Los Angeles urban neighborhood and in the nation’s educational system. Not only are their students outperforming other students in neighboring schools, but last year they became the first elementary school in South Los Angeles to receive the National Blue Ribbon Award– the highest honor an American school can achieve.

The National Blue Ribbon Award is a United States program created in 1981 “to honor schools which have achieved high levels of performance or significant improvements with emphasis on schools serving disadvantaged students.”

UPDATE: In 2013, Synergy Charter Academy was also recognized as one of America's Best Urban Schools by the National Center for Urban School Transformation.

Stepping Out in Faith

Synergy’s story began when Randy and Meg Palisoc, teachers and alumni of InterVarsity Christian Fellowship, had a vision to create a free alternative public school for elementary students in South Los Angeles – similar to the schools featured in the documentary Waiting for Superman.

As teachers, Randy and Meg wanted to do something that would help “eliminate the achievement gap that has persisted for generations among educationally disadvantaged students.”  So, they stepped out in faith and took on an incredible challenge – they founded a charter school.

In 2005, Randy told USC Urban Ed Magazine, “If you’re a classroom teacher in the third grade, each year you can influence the lives of 20 students.  If you start a charter school, you can affect the lives of 120 students from kindergarten through fifth grade.  And if you do well as a school, you can serve as a model for the entire school district.  That’s our vision.”

After seven years of consistent recognition and awards, Meg believes that God has expanded their vision even more.

“Our goal now is to bring unity among school systems as there is a lot of competition,” stated Meg. “We want to empower schools with higher quality education and share our practices with the rest of the American school system, so that we can all succeed.”

According to Meg, InterVarsity had a significant role in preparing and shaping her for the work she now does.

“When I was a student at USC, I got pretty involved in InterVarsity,” mentioned Meg. “The things that especially played a key role in shaping my passions were experiences like the Chicago Urban Project and Urbana 93.”

Meg planned to go overseas as a missionary after college, so she looked for various opportunities to grow in her faith.  She especially remembered the summer after her junior year, when God invited her to go on an InterVarsity summer missions trip – to Chicago.

“When I went on InterVarsity’s Chicago Urban Project in the summer of 1995, little did I know that God was preparing me for the rest of my life,” recalled Meg.  “It was such a stretching experience. While I really loved the kids I worked with and had a heart for the urban setting, it was tough work.”

That fall as Meg was looking for ways to grow spiritually, Randy committed his life to following Jesus for the first time.  Then, as Randy started getting involved in InterVarsity his senior year, he also met and started dating Meg.

While Randy was supportive of Meg’s desire to go overseas, he wasn’t sure he was called to go overseas.  So, as Randy and Meg graduated and began to discuss marriage, Meg decided to stay at USC and get her Master’s degree.  Meanwhile, Randy got a job as an Office Manager, but it only took a year for Randy to discover that “he wasn’t satisfied with business.”

During this time, God used a friend and alumnus from their USC InterVarsity chapter to suggest that Randy should try teaching.

“Randy had never ever considered teaching, but he decided to try it . . . and he loved it!” exclaimed Meg.  “He’s a natural.”

Randy’s passion for teaching inspired Meg to become a teacher as well.  “Which is funny,” remarked Meg, “because when I was in elementary school, my dream was to be a teacher.  But as a Chinese-American, I never felt the freedom to say that aloud because of cultural pressure to aim for a career in medicine or law.”

While Randy and Meg did not end up overseas, they have indeed lived sacrificial lives for the sake of those that God has called them to.

To get Synergy up and running, Meg and Randy had to start a line of credit on their home to pay for the school’s expenses.  They are responsible for all paperwork a district office usually does, as their school is considered “a separate school district.” They have also worn multiple hats from taking out trash and unclogging toilets to leading teacher trainings and speaking at national conferences.  They do all of this extra work without extra funds from the government.

“Every year, we depend on God to provide us the resources to provide another year of education to our students,” said Meg. “And God keeps providing for us.”