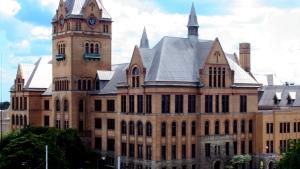 UPDATE: InterVarsity's Wayne State University chapter has been allowed back on campus. More information in this Becket news release.

WASHINGTON, D.C. –InterVarsity is fighting for its right to continue serving at a campus it has been on for over 75 years. In InterVarsity Christian Fellowship v. Wayne State University, an InterVarsity Christian Fellowship student group, represented by Becket, sued Michigan-based Wayne State University after school officials stripped them of official recognition just because the group requires its leaders to affirm their faith. Wayne State has over 400 student groups that contribute to its intellectual and cultural diversity, all of which are free to select leaders who embrace their missions—except, suddenly, one Christian student group.

InterVarsity welcomes all students to its meetings and to join as members. It requires only that its leaders believe in and live out its faith. Yet in 2017, Wayne State rejected the group’s constitution, derecognized InterVarsity, and cancelled all of InterVarsity’s reserved meetings. After 75 years, Wayne State decided that InterVarsity’s religious leadership requirements violated school policy. Meanwhile Wayne State actively violates its own policy in many of its programs, and allows dozens of other larger student groups do the same.

“InterVarsity just wants to continue to serve Wayne State students as we have for 75 years,” said Greg Jao, InterVarsity Director of External Relations. “Students should be able to find a campus community which reflects their faith tradition with authenticity and integrity.”

InterVarsity Christian Fellowship at Wayne State is one of the oldest InterVarsity chapters in the country, and has held weekly Bible studies, meetings, and organized service opportunities on campus for over 75 years. In 2009 the group sponsored a series of campus events that raised awareness regarding human trafficking. And the group regularly hosts discussions of important issues, like the intersection between faith, race, and social justice.

Now InterVarsity is given second-class status, forced to rent tables like outside vendors if it wants to host discussions or reach out to new students. It can no longer reserve meeting rooms for free like other student groups.