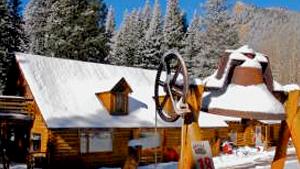 Bear Trap Ranch was one of four retreat and training centers operated by InterVarsity. The camp is located in the Rocky Mountains near Colorado Springs, CO, and has been a part of InterVarsity’s ministry to college students and faculty since 1953. Over that period of almost 60 years, thousands of InterVarsity students, faculty, and alumni, as well as members of other Christian groups, have enjoyed the natural beauty of this small valley in the Pike National Forest. Many men and women in Christian service look back to life-changing decisions made while attending camps or other functions at Bear Trap Ranch.

Although InterVarsity owned the buildings at Bear Trap Ranch, use of the land was based on a long-term permit with the U.S. Forest Service. The limits imposed by this arrangement, as well as a number of other recent developments, raised questions about the long term viability of Bear Trap. Following a thorough study by two outside organizations, InterVarsity decided to close the camp in the middle of 2011 and investigate alternatives, including turning over the camp to another ministry.

With timing that could only be described as providential, the leaders of Band of Brothers stepped forward and began exploring with InterVarsity the possibility of a transfer.  “Throughout the process of the discussions with Band of Brothers, working with the Forest Service, and contacting our constituents, we were repeatedly aware of the leading of the Holy Spirit as doors were opened and potential barriers were removed,” said Karon Morton, InterVarsity’s Vice President and Director of Operations.

Morton is pleased that the Christian legacy of Bear Trap Ranch will be preserved by its new operators. The transfer agreement encourages InterVarsity staff, alumni, and family camp groups to continue to use Bear Trap Ranch at a discounted rate and planning has already begun for three InterVarsity family camps during the summer of 2012.

InterVarsity Christian Fellowship/USA is a campus ministry that has worked with students and faculty on U.S. college and university campuses for more than 70 years.  InterVarsity is one of the founding members of the International Fellowship of Evangelical Students, which has member groups and affiliates in more than 150 countries. InterVarsity will continue to operate Campus by the Sea, Cedar Campus, and Toah Nipi as retreat and training centers.