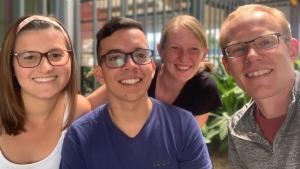 When Joel and Rachel Watters first visited the campus of La Universidad Nacional Pérez Zeledón (la UNA) in southern Costa Rica a year ago, they sensed that God was already at work, preparing the way to plant ministry there. Rachel and Joel are Link staff serving with IFES sister movement Estudiantes Cristianos Unidos (ECU) in Costa Rica.

One of the first students they met was Mariela who immediately started inviting her friends to get involved. She quickly became a local leader. “When you’re planting you’re always praying for a person of peace that the Holy Spirit brings, and Mariela has been that for us on this campus,” Joel said.

They also met a faculty member who showed them a meeting schedule on his phone. “Three weeks ago, three other professors and I began praying for a Christian group to come to our campus,” he told them, with tears in his eyes. “We feel like you guys are an answer to that prayer.”

Joel and Rachel spent three days on the campus, joined by a group of InterVarsity students from the US Midwest participating in a Global Program. They did outreach with Proxe stations, coordinated several Bible studies, and told the students that they would return when the new year of classes started in February.

In 40 years of campus ministry in Costa Rica, ECU had never been able to expand out of the central valley and reach the southern part of the country. Now in their second year with ECU, Joel and Rachel have planted a chapter at the main public university in the southern region and are starting to turn their attention to almost a half dozen other area campuses.

Joel and Rachel spent their first year in Costa Rica in San Jose, brushing up on their Spanish language skills and working with ECU on campuses there. Now they lead Bible studies in Spanish but also meet with students who want to practice their English, since Costa Rica is a major Latin American tourism destination and many jobs require English proficieny.

“I love learning about Costa Rican culture, and I think people are interested in learning about our US culture too,” Joel said. “There’s a connection there, an interest in learning from one another, that opens doors and opportunities.”

Joel and Rachel met in a young adult group at a church in Cedar Rapids, Iowa in 2009. Joel had taken a year off from college and was living at home with his parents. Rachel had been on staff for five years and was working with the InterVarsity chapter at Coe College.

After they married, Joel pursued a physical therapy degree at Creighton University, and Rachel worked with Eric and Stacy Rafferty to plant the first InterVarsity chapters in the state of Nebraska. Joel volunteered to help lead Bible studies and, together with Rachel, helped lead students on Global Program trips to Ethiopia and then China.

“InterVarsity has always been a part of our marriage and our life,” Joel said. “As I got more involved I felt like God invited me to be open to staff work, and especially going overseas as a family and serving with Link.”

Each short-term ministry trip helped nurture their desire to live and do ministry overseas. “As we have taken our students overseas and experienced God in a different culture and context, we have seen their faith grow,” he said.

When they joined Link in 2017 they discovered their planting skills from Nebraska matched the needs of ECU in Costa Rica. Now, as they are enjoying starting something new they are also facing new challenges. When they arrived at the beginning of the school year and began talking with school administrators, they realized that la UNA had never had formal organizations such as ECU on campus.

However, as they built relationship with the administration and staff, and met and shared the vision of the ministry, they were given formal permission to be on campus. Even in this process, Joel and Rachel could see the hand of God working and opening doors through these relationships.

They also discovered that students at la UNA do not live on campus; instead, they ride the bus to class. It’s a major sacrifice to stay late or come early.

While they are working on finding the best times for meetings, they are still having life-changing conversations with students. One student, a self-proclaimed skeptic, has come to every single Bible study so far. “It’s so fun to watch his eyes and his heart be opened as we study the life of Jesus in the book of John,” Joel said.

Recently, as Joel met with Mariela for another Bible study, they felt the Holy Spirit lead them to sit by one particular student who they did not know. Her ears perked up as she heard them talking about Nicodemus in John 3. “My pastor just spoke on Nicodemus yesterday,” she told them. “I’m really interested in being a part of this group.”

The Watters are confident that they made the right decision to join Link staff. “We have hard days and challenging days,” Joel said, “but also days where you see the Lord has been going ahead and preparing the way.”

Find out more about how you can help Link staff like Joel and Rachel as they serve IFES movements in other countries.