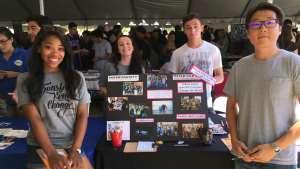 InterVarsity’s best evangelism project should no longer be a well-kept secret. “Zero conversion coaching is our most successful and most fruitful project,” said Evangelism Director Doug Schaupp. “I don’t have any other tool that has worked 100 percent of the time. It always produces conversions.”

Conversion to life in Christ is one of InterVarsity’s best metrics, and we’ve seen incredible growth in recent years. Decisions to follow Jesus surpassed 4,500 last year, up by 130 percent from ten years ago. “That includes 10 new believers a day for the past four years,” Doug said. But the increase is not consistent across the board. “Many chapters saw zero conversions last year.”

Melissa Montecuollo inherited one of those zero conversion chapters. After teaching middle school English for several years, she longed for a job that allowed for more spiritual conversations and transformative opportunities. It was difficult to have conversations with middle schoolers in public school about how they could improve their lives.

She considered joining InterVarsity staff. “When I heard about Northridge not having any staff at the time, I just knew I had to be there,” she said. California State University—Northridge was close to where she grew up. “I knew that was a place where God wanted to do something.”

Melissa’s arrival at Northridge brought stability to the chapter, and she enjoyed investing in the students’ lives. “With InterVarsity, I could have real conversations with students about God and faith, and about their hopes and dreams for their future,” she said.

And yet transformation didn’t seem to be happening as she had hoped it would. “We kind of knew what to do but we didn’t know how to cultivate a culture of students who were ready to say yes to Jesus in some way.”

Melissa was thrilled to find out that the Evangelism Department had started offering zero conversion coaching for chapters like hers. After four years at Northridge, she was ready to sign up.

Zero conversion coaching was created by Bryan Enderle, a part-time staff member who is also a very popular chemistry lecturer at the University of California—Davis. Bryan has been an InterVarsity staff member for 16 years, and for the past three years he’s been an evangelism coach. Learning about so many chapters without conversions compelled him to respond and develop a coaching plan.

“The most common problem in zero conversion chapters is not doing an ask,” Bryan said. “They don't ask people to believe.” Doug quotes James 4:2, “You do not have because you do not ask.”

Other common problems are looking only for first time believers and not nominal Christians who are Christian in name only, and using Scripture passages and wording that doesn’t resonate with listeners. And, sometimes, the answer to the zero conversion problem is as simple as helping a chapter recognize when someone actually has made a decision to follow Jesus.

Melissa’s coach at Northridge was Leslie Jonan (now Leslie Kearsley), from the University of California—Los Angeles. Leslie and Melissa had been interns together and both had been on staff for about four years. But Leslie’s experience at one of InterVarsity’s top ten conversion campuses helped her give Melissa a new perspective.

“They just need someone who is checking in with them, giving them application steps, being outside eyes, and helping them move forward,” Bryan said. The coach doesn’t necessarily have all the answers; sometimes they are just somebody to talk with and answer questions. The coaching is done by phone or video, and entails one 90-minute call per month for nine months.

Working together, Melissa and Leslie both had ideas that they were able to discuss and evaluate. Melissa changed the way invitations to faith were given at large group meetings and began collecting written records on decisions that were made. Leslie also helped her with ideas on how to invite students to Fall Conference. “That was really helpful for getting students there who were ready to make decisions,” Melissa said.

With Leslie’s coaching assistance, Melissa saw a culture change at Northridge last year. The theme of the year was, “What does it mean to say yes to Jesus?” There were 25 first-time conversions or returns to faith. “We are providing opportunities for people to say yes to Jesus,” Melissa said. “If we help create the culture where that’s the norm, then the choice is there to say yes to Jesus or not, and we don’t have to worry about that.”

Doug is pleased that all of the chapters who have participated in coaching for the full nine months have seen new faith decisions. “This includes West Coast, Midwest, and East Coast chapters, state schools, private schools, and community colleges, plus International Student Ministry and Black Campus Ministry,” he said. “Even student leaders are signing up for our coaching.”

The secret is getting out. Coaching is accelerating InterVarsity’s mission on campus.