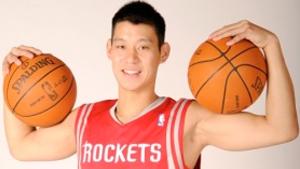 Jeremy Lin’s InterVarsity story was first written two years ago on InterVarsity’s StudentSoul website when he was still a student at Harvard. The interview revealed his passion for daily Bible study, weekly small group meetings, regular church attendance, and sharing the gospel with his teammates by word and by example.

In 2012, after Jeremy set an NBA record for the New York Knicks with an incredible stretch of 109 points scored in his first four starts, and the New York Times included a link to StudentSoul in one of its Jeremy Lin stories, page views went through the roof. The excitement was dubbed "Linsanity." Following the 2012 season, Lin went on to sign a contract with the Houston Rockets.

Because he was a varsity athlete, Jeremy’s involvement in the Harvard-Radcliffe Asian American Christian Fellowship (HRAACF) and the broader Asian community at Harvard was somewhat limited, according to Adrian Tam, who was an InterVarsity/HRAACF Campus Staff Member during that period. “Jeremy was in the spotlight at Harvard before he was in the spotlight in the NBA,” Adrian said. “He showed that Asian Americans could be leaders, they could be athletic, and they could be bold and open about their faith in a winsome way.”

In a video testimony Jeremy said that he missed Christian community at Harvard until he connected with HRAACF. Adrian became a spiritual mentor to Jeremy, meeting with him regularly, studying the Bible together, and reading together such books as Too Busy Not to Pray.  “He loved his roommates, spending lots of intense one-on-one time with them, leading investigative Bible studies with them, and just plain hanging out with them.”

Adrian said that what he remembers most about Jeremy, from the time they first met, was his humility. “Even though he was more accomplished, smarter, and just plain bigger than I was, he always treated me with respect and honor.  He was real with me, earnestly desiring to follow God in all things. He had a quiet ambition—not only to be the best basketball player he could be, but also to be the best Christ-follower he could be.”

HRAACF is one of eight InterVarsity chapters at Harvard and currently has about 50 students regularly involved in its activities. Its history goes back 18 years to a time when InterVarsity student leaders noticed a growing number of Asian American students who weren’t engaged by any campus ministry.

One of those leaders, Tom Lin, graduated in 1994 and joined InterVarsity staff, commissioned to plant HRAACF.  Today Tom Lin (no relation to Jeremy) is InterVarsity’s Vice President for Missions and the director of Urbana 12.

“Generations of staff and student leaders have influenced HRAACF students, and I think we all count it a great privilege and joy when we see world-changers like Jeremy,” Tom said. “I personally am inspired, and so thankful to God for the role that this InterVarsity chapter has played in Jeremy Lin’s life.”

InterVarsity  AAM chapters are operating on over two dozen other U.S. college campuses. However, more than two thirds of the Asian American students involved with InterVarsity are a part of multiethnic chapters.

“AAM seeks to introduce Jesus to students who would never enter a majority culture fellowship,” said James Choung. “And with the growing numbers of Asian Americans on campus, we're needed more than ever before. As they take on more influence in our culture, like Jeremy Lin, we hope that our ministries will prepare Asian Americans to exert that influence with the love and values of Jesus.”

More coverage of Jeremy Lin, his faith foundation, and his InterVarsity connection: