Listening on the Margins 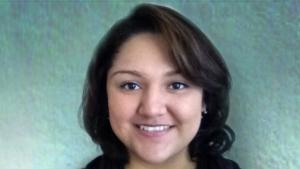 God commands us to care for the most vulnerable, but this can often seem like an impossible task in our daily lives. Anthropology PhD student and InterVarsity alumna Almita Miranda of Northwestern University discovered that her life experiences, research skills, and faith could help her advocate for a group on the margins: undocumented immigrants and their families.

Almita’s parents immigrated to the United States from Mexico in the 1970s. Because of their experiences and others in Almita’s community, “immigration was always part of my life,” she said. But it wasn’t until her undergraduate years at Northwestern University that Almita first came to terms with her ethnic identity and learned about the historic and ongoing forms of systemic discrimination against racial minorities. It was these things that helped her recognize her calling to work with undocumented Mexican immigrants.

As a first-generation college student, undergraduate life was overwhelming for Almita at first. “I felt alienated at times, both for being Latina and for coming from a working-class background,” she said. Almita found a safe community that helped her through this time of transition when she joined InterVarsity’s LaFe (Latino Fellowship).

Northwestern’s LaFe Bible study provided a place for her to explore the ways her ethnicity and her faith intersected. “Attending the first LaFe national conference in 2004, where we read the book of Esther, helped me realize that being a Christian did not mean having to deny my ethnic identity,” Almita said. “Rather, I could embrace it as it informs my unique experiences, which can be used for God’s purpose.”

As Almita explored her ethnic identity, she also discovered her academic passions. Taking courses on Latino ethnography transformed her career path—she found herself drawn to anthropology.

One summer, she received a fellowship to do research about “mixed-status families,” or families where some members are undocumented while others are U.S. citizens. Her interviews with these families struck a chord, leading her to pursue a PhD in cultural anthropology at Northwestern. “God gave me a calling,” Almita said.

That calling involves using her research skills for more than just discovering new information. Almita spends a lot of time doing ethnographic fieldwork, interviewing individuals who have been affected in some way by the current U.S. immigration system, as well as local pro-immigration rights activists.

Almita has heard from members of mixed-status families, undocumented workers, and migrants who have been deported. She sees her interviews as a way to bear witness to their struggles and listen to stories that might otherwise go untold.

Many of these stories will be part of Almita’s dissertation as well, which will give them an even wider audience. It’s a kind of advocacy that doesn’t immediately spring to most people’s minds, but Almita sees it as one of the most important ways she can help these families.

“God can work through us in whatever field or profession we’ve chosen to work,” Almita said. “I can contribute to the fight for social justice through my writing on immigration.”

Because immigration reform requires systemic change, it can be a discouraging thing to advocate for, and Almita has often felt as though “it’s so close and yet so far.” But the people she interviews are an inspiration to her as she works.

“Mixed-status families are often faced with incredible challenges, but they remain hopeful. Many of them turn to God for that hope. They’ve taught me that prayer is the fuel that helps us keep going,” she said. When she feels stuck, prayer restores her motivation and reminds her of God’s faithfulness and mercy. “Even when I feel like no one else is listening to the cry for change, I know that God is listening,” Almita said.

Almita’s advocacy on behalf of immigrant families goes beyond her PhD research. She helps members of her community study for the naturalization exam and has participated in many marches and rallies for reform, both in Chicago and in Washington, D.C. She has also traveled to D.C. along with the community group Centro Sin Fronteras (Center Without Borders) to speak to representatives and senators about changing immigration policies.

“The families I work with teach me more about faith and la lucha (the fight) for social justice than what I could ever give them back. But I try to use my position as an academic to write about their experiences and struggles, and contextualize them within the larger political and economic processes that can contribute to undocumented migration and family separation,” Almita said.

And in all these circumstances, she’s been reminded of an important truth: “God loves all people. And he is a God of justice, for he promises to defend and protect the most vulnerable.”