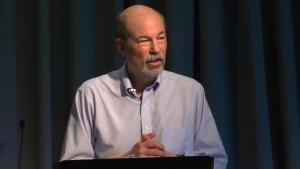 With his immune system collapsing and his white blood cells turning to junk, InterVarsity President Alec Hill stepped out of office in the spring of 2015. Returning to his native Seattle for treatment of myelodysplasia (MDS), a cancer of the bone marrow, his doctor told him MDS was worse than leukemia.

The news from his doctors kept getting worse until Alec found out his brother Grant was an identical match for a bone marrow transplant. “That was when the elevator started going back up,” he said.

But the elevator ride was still rough for months. It included massive doses of chemotherapy and full-body radiation. While the transplant took hold, 50 pills a day were needed to replace his immune system. Then, finally, more great news: the transplant was working. He had a new immune system and his brother’s DNA. But he still faced 12 months of isolation to protect himself from infection.

Now, two years later, as President Emeritus of InterVarsity, Alec mentors younger staff and considers each day “bonus time,” like the extra minutes that are added at the end of a soccer match. He takes seriously the admonition from Psalm 90:12, “Teach us to number our days.” Achievements have become less important, and relationships much more important as he tries to live each day fully, one day at a time.

Speaking to the staff at InterVarsity’s National Service Center in Madison, Wisconsin, for the first time in 25 months, Alec offered two other lessons that were impressed upon him through his brush with his own mortality.

The first is to embrace the Lord’s presence. Like Moses in Exodus 33:15, who said to God, “If your Presence does not go with us, do not send us up from here,” Alec’s biggest concern was his relationship with God through the experience. He has learned anew that God draws closer as we reach out to him. “When we are at our worst, when life is at its hardest, his presence is the sweetest,” he said.

“What I’ve learned from this is that living in crisis is not the enemy of his presence, but being too busy is,” Alec said. “Ignoring the Sabbath is, doing drive-by devotions is, letting our tech devices crowd out silence is. I encourage all of us to make seeking his presence our highest priority. When you’re in a crisis, this foundation is a rock and not sand.”

The second lesson he has learned is the illusion of control. He admits that he used to think he had control over most of his own life and compared himself to the captain of a large ship on a small lake. But reality has a way of letting us know that God is in control, not us.

“We have to be humble and admit we don’t always understand how God exercises his sovereignty,” he said. He now sees himself more as the captain of a small boat tossing in the middle of the Pacific Ocean. For him, observing the Sabbath is an admission of our limitations and dependence on God.

Small aggravations no longer bother him as they once did. He takes more risks, is less diplomatic, and extends grace more readily. Surviving a crisis is, surprisingly, very liberating.

He takes each day one at a time. At the beginning of each new day he asks, “What manna do you have for me today, Lord?” He rejoices in God’s faithfulness.

“While my medical experience is not your experience, our spiritual journeys are similar,” he concluded.