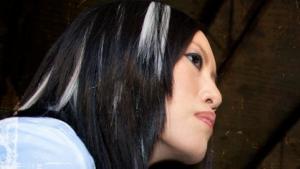 Sex trafficking has been fought in many ways and on many levels: through national and local laws, through training and by raising awareness, through job-skills development and education for females, through documentaries and books.

InterVarsity alumna and indie rock singer-songwriter Janie Chu is engaging in the battle on another level—a soul level—through music.

As a Chinese American, Janie was trained in classical piano from age six to age eighteen. “I loved practicing all the major pieces I was given,” she said, “but I would still try to play all the pop songs on the radio by ear.” Her summers were spent at the piano, practicing songs and writing new ones to perform at church summer camp.

In those growing-up years she also found faith, attending a Chinese Christian church with her mom and eventually committing her life to Jesus as a young adolescent. But, she said, “I really didn’t understand the full weight of his death and resurrection until I was in high school. That’s really when living out that faith became real for me.”

Janie’s dream was to study modern music in college, but being a dutiful daughter, she went to Emory University in Atlanta to double major in sociology and classical music. And though those fields of study weren’t her first choice, God used her time at Emory to grow seeds he’d placed in her.

One of those seeds was her Christian faith. “I started college in the mid-nineties at an inwardly turbulent time in my life,” Janie said, “but I was determined to stay active in my faith.” She quickly became involved in two InterVarsity chapters at Emory: Emory Christian Fellowship and Asian Christian Fellowship.

“InterVarsity had a tremendous impact on the way I processed my faith,” she said. “I made some of my closest friends in college there. And I still think about the impact on my faith through inductive Bible studies, tracks at Chapter Camps, and even some basic fundamentals of Christianity that inform my current church involvement.”

Janie wasn’t just growing in her Christian faith, however; Emory also stirred in her a heart for social justice. She took a number of classes on gender inequality and began to wrestle with the unjust ways different people groups in society were treated. These topics would eventually find their way into her music.

With her desire to study modern music growing stronger, Janie made the decision to transfer to Belmont University in Nashville, a school well known for its commercial music major that combines classes in songwriting, music business, music technology, and performance in contemporary styles of music.

She found support for her new major at InterVarsity’s 1996 Urbana Student Missions Conference, which she attended before starting winter classes at Belmont. One seminar offered there, “Christian Artists in the Secular Marketplace,” was particularly helpful to her in processing not just her faith but also her art and the modern music industry she was moving toward. The coleaders of the seminar, Bruce Kuhn (an actor) and his wife (a visual artist), provided a picture of what it looks like to live out Christian faith as an artist. “It was a great comfort and encouragement to me,” Janie said.

Once at Belmont, she enjoyed opportunities to develop her songwriting skills through classes and gain professional experience through internships. Her Christian faith continued to grow as well through the InterVarsity chapter at nearby Vanderbilt University. “But something still didn’t feel quite right,” she said. “I wrestled with this strange dichotomy of wanting to write and make great music as a recording and performing artist but at the same time feeling like my desire to be involved in social justice work was getting neglected.” The struggle to see how her passions fit together continued throughout her twenties, and even while she was writing and recording her first album, Roots (2006).

In 2008, her music and her heart for social justice came rushing together to address an issue that was rampant right in her own city: sex trafficking. “My church did a presentation about the problem of sex trafficking in my hometown of Atlanta,” she recalled. “I was awakened to the fact that it was a domestic issue. It deeply disturbed me.” She started learning more and getting involved with organizations in Atlanta who were effectively combatting sexual abuse.

But she was already doing more than she realized to help victims of sex trafficking. Both Roots and her latest album, The Human Condition (2012), contain songs born out of places of deep personal pain for Janie—pain that, as it turns out, is not so different from what those who’ve been sexually abused are experiencing. “I never imagined that the very real pain I experienced and displayed on my albums would resonate so strongly with victims and be a help in their healing process,” she said. “I get letters from women in aftercare programs, people I’ve spoken to and performed for at anti-trafficking concerts and programs. It really just blows me away to see God at work through my music.”

In this past year Janie was given the opportunity to combine music and social justice on an even broader scale as she took on the roles of project coordinator, producer, and contributor to Exposing Darkness, a compilation of music that is being produced for InterVarsity’s Price of Life: New York City campaign for anti-trafficking. “As an artist and abolitionist, it’s been a rewarding process connecting with other like-minded abolitionist musicians to collectively form an album of our interpretations on the issue,” she said.

Her hope is that music—with its “universal connection to every soul,” as Janie put it—can help people see the problem, the solutions, and the church in a new light, and experience the truth of who Jesus is. “The church is so often judged for appearing divisive on so many controversial issues,” she said. “Here we have an opportunity and responsibility to show just how much Jesus cares about sex trafficking, and that fighting it is directly aligned with the compassion, truth, justice, and love that epitomize his kingdom.”

What’s her ultimate dream for Price of Life and Exposing Darkness? “My hope is that the students and individuals that attend Price of Life will see the gospel of Jesus Christ and our mutual desire to see modern slavery addressed and abolished in our lifetime,” she said.

That’s a big dream, but it’s one that Janie knows God—the God who has led her into places of freedom and used her music for his glory in ways she couldn’t have imagined—can bring to fruition.

You can get involved in Price of Life too! Find out how.