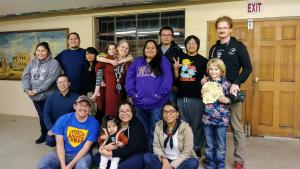 Standing outside the house in the cooling air of a New Mexico evening, you hear laughter. Warm yellow light spills through the windows as you cross the sidewalk to the front door. Rashawn, the man you met on campus, welcomes you in with a big grin. Inside the laughter and conversations buzz even louder.

Past the sand-colored dining room walls you see two bulging bags of flour on the kitchen counter. People are bustling between the oven and sink. The savory smell of chicken and frybread thickens the air. Suddenly, you’re more hungry than nervous.

As more people greet you—one of them who you’d just seen in class a few hours ago—you feel a warmth that has nothing to do with temperature. From movies to bowling, they start asking you about your hobbies. Then someone pulls out the card game UNO, and everyone groans, “Not that again!” even as they settle down to play.

What you’ve just begun to experience is your first family dinner with the Native InterVarsity chapter at San Juan College.

Everything you saw traces back to when Rashawn Ramone, of the Nambé Nation, went to his first family dinner in 2008 as a student at Fort Lewis College in Colorado. As the night went on, and he continued coming back week after week, his homesickness and anxiety began to melt in light of the laughter and deep conversations he was having.

After graduation, Rashawn became an InterVarsity campus minister at San Juan College, a two-year community school. With no dorms on campus and a lack of community events, especially for Native students, he sensed a perfect opportunity to start hosting family dinners. Framed as a chance for a free meal and a break from the stress of schoolwork, the biweekly event immediately caught students’ attention.

“They always tell me this is a way of helping them to know the community,” Rashawn said. “It can definitely help them to be together, share laughs, know each other, see what the whole community’s like, and see the people. They never really had time to be able to sit down with other people and listen to them before.”

“I remember we had a slow start in the beginning trying to grow as a club,” said Shylasha Nunez, who belongs to the Navajo Tł’izí lání, Naakai dine’é, and Lók’aa’ dine’é Clans. But after four years of being involved with Native InterVarsity, Shy has seen it grow. “As we got to know our club members more, we became a family. Each family dinner, we have gotten closer with each other. Also inviting friends and family to join us made everything full of joy.”

By the time the food is all ready, the small dining room is overflowing with people. And they’re not just college students. Grandparents, moms and dads, even nieces and nephews playing tag, weaving between the grownups—it really is a dinner with the whole family.

Rashawn and several others carry over baskets of steaming frybread and plates of grilled chicken covered in a sweet, tangy sauce. After pausing to pray, everyone digs in. Rashawn goes on to explain that the chicken—luau chicken actually—is based on a recipe he got while visiting fellow InterVarsity campus ministers in Hawaiʻi. He shares more about his trip and the many ways students are growing closer to God.

The meal continues, and someone asks what they should make for the next family dinner. The answers vary: green bean and mushroom soup casserole, dumplings, pork chops and mac and cheese, even spaghetti tacos, inspired by the iCarly show.

Whatever it ends up being, there’s an unspoken guarantee that it will be a family event, everyone chipping in to help, whether buying supplies, doing the cooking, or just bringing plenty of laughter and lively conversation.

Rashawn had originally started out doing all the cooking for family dinners and budgeting all the supplies as part of his ministry. But as the event has grown in popularity, several students asked if they could help. “This semester, they started to make the meals that their families make,” he said. “In a way, they’re sharing their story with other people. The food tells a story. It tells a story about where they’re coming from, how they learned to make the food.”

And once they saw the positive influence family dinners were having on Native students, San Juan College stepped in to cover all the costs for the event and help publicize it on campus. “There’s certainly not a lot of loneliness anymore on campus,” another student, Kelsi L’u Beth Monroe, said. “Our Native InterVarsity chapter is the most active club on our campus right now. It feels like we’re this plant that was put into the ground, and it came up and has light on it, like a sunflower. It feels like we can be this beacon of hope to help everyone find their way in the darkness.”

Excited by the ways everyone was growing and connecting with each other, Kelsi brought her uncle to several dinners. “He was incredibly welcomed,” she said. “He said it felt like one of those old-style powwows in Oklahoma, when they get together and eat, like a feast.”

Rashawn has seen these events have quite an influence on students within the chapter, especially those who help host or cook. “They do have a better, healthier relationship with their families,” he said. “When Native students invite their nephews, parents, grandparents, or relatives, they always tell me that doing family dinners is really good for them.”

After the food is cleared away, everyone settles back, and Rashawn says that Kelsi, a woman with cheerful laughter holding an infant, is going to share some of her story.

Kelsi begins explaining how her heritage is a little different than many Native people living in New Mexico, who are mainly Navajo. She is an enrolled member of the Southern Indian Tribe, a member of the Kitkehahki band of the Pawnee Nation, southern Cheyenne, Oglala, and Sicangu Lakota.

She shares how she first came across Native InterVarsity back in 2008. One afternoon while sitting in her dorm at Fort Lewis College, Kelsi started hearing music and laughter. The smell of frybread wafting in through her window was the deal breaker; she had to go check it out. Walking outside, she discovered a crowd of people, many of them wearing Frybread Power T-shirts, like the ones from a favorite childhood movie of hers, Smoke Signals. “I wanted to see how to get one of those shirts,” Kelsi grins.

She explains that she’d just unknowingly stumbled across Native InterVarsity’s annual Would Jesus Eat Frybread? (WJF) conference. As she continued getting more involved with the ministry, Kelsi would return to WJF in 2016. “It made me feel very healed and renewed as an American Indian woman,” she says. “I already knew I could be a Christian and still be practicing my traditional ways and beliefs, but WJF just affirmed everything.”

The more she speaks in that packed little room, still smelling of frybread and luau chicken, something deeper happens than just a casual meal. Trust is being built.

Over the course of five years, many have shared their story during family dinners, including several pastors and priests who have partnered with Rashawn. Some moments have been light-hearted and encouraging, but many times as people begin to feel more comfortable with the group, they share more vulnerable moments, like how they’ve personally struggled with the historical trauma interwoven throughout Native history.

“There’s a lot of stuff like that, like alcoholism or drugs or spiritual brokenness. Some of the things the students share, they feel like it’s a normal thing,” Rashawn said. “The sin is telling us a lie. That it’s normal. Keep doing it. And that’s been passed down from generation to generation. It’s a spiritual brokenness, a spiritual lie to ourselves. But we don’t actually know it’s not normal for us until God reveals it.”

Rashawn has experienced this journey firsthand. For many years, he didn’t even notice the ways that the past’s darkest moments had been affecting him. But as he began receiving personal healing from Jesus, he knew he had to share this with others.

A huge part of this involves contextualization. “I think the family dinners are a way of contextualizing,” Rashawn said. “Contextualization opens the conversations about what it means to be Native and a follower of Jesus and the common ground of Native culture and Christianity. [Students] do want healing. They do want to receive the gospel in a way that they can understand. [We are] helping [students] understand how to contextualize the gospel into a Native context that can be seen through their families. The food, laughter, stories, community are actually helping Native students to heal. I think Jesus is definitely telling me that he can receive [this trauma] and help us to heal. And that this won’t go on to the next generation. It won’t hurt more Native families.”

Healing has taken many forms. A number of students have either rededicated their lives to Jesus or chosen to follow him for the first time. For others, their relationships with their families, communities, and churches are being restored thanks to the Spirit’s work through family dinners and Native InterVarsity.

“I have never been any happier to make changes and see healing in the future for our people and with God,” said Shy Nunez. “One of my greatest moments I remember is being involved in our community and learning a better understanding of what it is to be Native. I am not traditional, but learning the knowledge of caring and working together has changed my perspective and views of the world in a different way, where I deeply felt I can take bigger actions to help others.”

Many are discovering for the first time how their culture is a God-given gift and opportunity to praise and honor him. “God used Native InterVarsity to bring me closer to my ancestry and also remind me of the wonderful and amazing and strong and resilient people that I come from,” Kelsi said.

“My grandpa always told me when you feed someone, you’re giving them life,” she added. “Family dinners give each of us life by nourishing our bodies through the sharing of food, nourishing our souls in sharing in the glory of God’s creation, and nourishing our spirits in fellowship with one another. It doesn’t just nourish our physical bodies. It helps our mental states to know that we’re not alone, our emotional states to allow us to open up to each other, and spiritual states in which each of us pray for one another. And we’re growing in a community and family.”