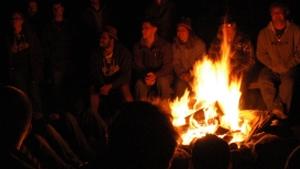 Final exams are not the last event of the school year for InterVarsity students. Many spend one additional week together sharpening their spiritual vision for the coming school year.

Traditionally this week has been called Chapter Camp. The Chapter Camp schedule begins in April and continues through May and into June at locations from Campus by the Sea on Catalina Island, California, to Toah Nipi in New Hampshire, and many places in between. (A small number of chapters have Chapter Camp in August, just before the start of the school year.)

Bradon, who had just spent a semester at Grand Rapids Community College after dropping out of another school and hitchhiking around Europe for a year, told me that coming to Cedar Campus was re-energizing, after an exhausting exam week. “It's an amazing place with amazing people, and a good opportunity to grow in relationship to God," he said.

Marc Papai, InterVarsity’s Divisional Director for the Ohio Valley Division, called his first week at Cedar Campus in 1974 one of the most significant weeks of his life. “I remember realizing during that week that Christianity was not something I was adding to my life; it was going to be my life,” he said.

Marc served as the Overall Program Director at Cedar Campus for the week I was there. "Chapter Focus Week [as it’s called at Cedar Campus] is a time for us to invest in six days of training our students in ways that have benefits out of proportion with that amount of time,” he said. “Our experience has been when we send students here we often know how strong the ministry will be in the succeeding year because the leadership development that happens here, the vision that's cast, the shared community experiences that chapters have, all are great predictors of the quality of the chapters' ministry the following year."

Students spent many hours in tracks being trained in Bible study, leadership, prayer, and evangelism; and learning about apologetics, cross-cultural outreach, and justice issues. They were challenged to commit themselves to follow Jesus more faithfully.

"We're bold in our expectations for what happens here,” Marc said. “We expect God to do life-changing kinds of things and in the testimonies shared by many students that has been true. It can be anything from  conversions to faith in Christ as non-Christians who are part of our chapters join us, to commitments to life-long service, to some kind of risk-taking on campus. All sorts of things are woven into the tracks and the general Scripture exposition we do here."

A Legacy of Prayer

The beauty of the natural setting, far from the demands of day-to-day life, encourages students to reflect. So also do the prayers of those who know the kind of impact Chapter Focus Week can have. Marc notes that 60 years of prayers have been focused on Cedar Campus. “That's an astonishing gift to our movement and to students,” he said. “They enter into something that is already happening here.”

During the week I was at Cedar Campus six students committed to new faith in Jesus Christ, and 60 students recommitted their lives to follow Christ. More than 100 students made a commitment to challenge themselves and take a risk as a Christian on campus, such as leading an evangelistic Bible study.

On Thursday evening, the last night of Chapter Focus Week, I walked out to Whitefish Point, where the Michigan Tech chapter was gathered around a bonfire. The students were openly sharing how God had been at work in their lives that week, and the previous semester. They shared about the risks they had taken, struggles they had endured, and decisions they had made. Someone prayed for each person after they had shared.

"People have referred to certain places on earth as 'thin places,' where the distance between heaven and earth seems shorter,” Marc said. “Without being too sentimental, or strange about it, I think that Cedar Campus is one of the thinnest.”

For more on Chapter Focus Week: